An unforgettable adventure with TERA

Tera an excellent game recommended one hundred percent was released to the public on January 25, 2011, with a wide expectation as many players were waiting even I was anxious to get out and enjoy that wonderful game.
Has a high percentage of players active. Its level of competitiveness is very wide because it is divided in several forms of the game in PVP and PVM. I, in particular, chose PVM since I like exploration and teamwork doing missions more than I know that over time they will end up getting the biggest reward of the missions.
Instead, the PVP is one hundred percent go looking for other people to make duels and kill them, which disadvantages those who are starting to play since you do not have the necessary objects to be able to defend yourself and survive the ruthless attacks that throw your enemies. By playing this game you can get 100 Play
The gameplay of tera is impressive even though the buttons are distanced since they have many objects to be used. This game is amazing as it presents mounts, dragons, horses, unicorns, presents many mounts that you will be surprised and you would like to have one to look like a warrior of the light of TERA.
This great game features guilds that help you claim areas and help you grow as a player for any mission, monsters you need to kill.
The communication of tera is good through a text box you can communicate throughout this beautiful adventure, to be able to talk with other people select the box to talk to whom you want for example the general chat, guild chat, team chat, guild chat.
All these advances for the year that the game was opened were exceptional since they fulfilled what was expected, although at the moment all the games are working by a communication to open microphone is to say open voice. It is expected that you will be able to speak by voice chat soon. 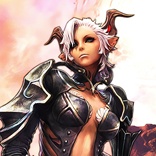 100 Play
Tera online has fulfilled all expectations to this day people are very grateful to the creators of the game.
This great game has a high requirement to play that involves having a good computer, weighs about 45 GB that will occupy the hard disk, you must have at least 4 GB of RAM card the most recommended would be 8GB of RAM and a Video card at least 1GB. If you meet all these requirements you can spend an unforgettable adventure with a great game that marks you a before and after.
My point of view regarding this game is that it is very complete and when I play it I have too much fun since I have characters in PVM and PVP mode but as I said earlier I like PVM because I like to explore, I like to know new things In a world where everything is uncertain.
A Tip: Never leave the tutorial I tell you as an experience, skip the tutorial and after 5 minutes I had to create a new character because I was playing everything lost, so I decided to create another character and perform the tutorial to understand all the commands of the game.
On the map you will be marked with a yellow or red dot, everything depends on what you have to do and will guide you to the path that you must go.
With nothing more to say enjoy this great game and download it is totally free, you can download it by Steam or its website.
1406 0 Share
5.0 (1)