Undertale is a very popular indie game that was somewhat updated them imported onto the Nintendo switch. Today I will be reviewing the games mechanics plot and more. Undertale is cheaper than the average switch game and depending on the route you wish to take as well as your experience playing and or time spent playing a run can last you days up to weeks. It is a RPG or a role-play game, this works to its advantage as one of its strong points is the characters personality and the gamer’s ability to become attached to them. There are many characters to choose from and many ways to play that can lead to many endings and different bosses. There are three main modes: Pacifist, Genocide and neutral and today we will be reviewing them all as much as possible without spoilers as well as highlighting the strong and weak points of the game.
In a pacifist run you choose not to kill anybody, this makes the game significantly harder as you do not have any way of increasing your exp meaning some fights are more difficult , it also however is debatably the fastest run and the most satisfying as you get to interact with all the main cast of characters. This highlights a strong point of the game being its characters, the comedy between some of them such as the skeleton brothers Sans and Papyrus allow for comedy as well as also bringing a more serious light that older players can also appreciate. Overall the characters are all very well fleshed out but this can lead to at times darker topics being discussed or slightly disturbing scenes that may not be suitable for a very young audience, so I would personally recommend this game for anybody teenage or up especially if choosing the next route I will discuss genocide. Genocide is the route where you have to kill all enemies; while this grants you more health it also leads the hardest boss in the game. This route is the hardest and longest route to complete so should only be tackled when you have a good grasp of the game and or are experienced with similar games. 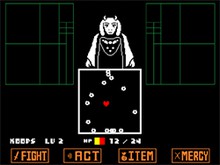 The final route is Neutral route which was mine and most peoples first run of the game. It requires the least amount of knowledge to complete (as you simply spare some and kill others) and is often the first route played when going into the game blind, It provides a little bit of the difficulty of the genocide route while still allowing you to interact with the characters you personally like as you can just kill those you do not like and want to interact with for the rest of the story. This therefore providing you with a good midpoint to review the game as you get the best of both worlds. The boss for this route is very well designed but and while not as difficult as some other bosses you will face in other runs it is still not something to scoff at. This route in particular can get disturbing towards the end so just be prepared mentally for the battle is my advice. To conclude if you want a fun RPG with simple graphic yet a loveable storyline this is the game you will want to invest in