The saga from the anime series HunterxHunter is very famous for many years and Xhunter is a game based on the world of HunterxHunter, this game has different modalities including main missions and side missions.

Xhunter has a great soundtrack for battles and cities, in addition, xHunter also has the possibility to play in PVE and PVP mode besides having different tournaments in which we can participate.

This game has available different servers in which we can play.

In Xhunter at first, we will be the protagonist of the series HunterxHunter and little by little we will be able to be recruiting different characters that appear in the series so that they join our team. 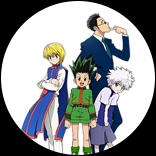 100 Play
In xhunter we can customize the weapons or objects that will have each of the characters that are on our team, at the end of each main battle we can get a chest with different objects and this is very useful because it helps us to gain more experience to our characters And level up more easily, since when recruiting a new character for our team, we will get it at level 1 and if we equip it with this object we can raise several levels, so if we are at level 20 and we get a level 1 characters we can level up this character quickly to level 20 to be at the same level as the other characters.

Personally, I think Xhunter is a great game and I have fun for many hours, it has good effects, good soundtrack and there is no need to install anything on your computer to play it besides this game is also available to play on our cell phones and That's a very good detail.
1949 0 Share
5.0 (1)