Your guide to Fortnite Arena Solos

Fortnite's arena game mode had been referred to as the game mode that saves fortnite. I am designed to rank a player by the amount of hype that they earn, which are like points. Leveling up inside the arena game mode is required to participate in tournaments and other events alike. it is also a great way to practice your skills, as the only people that you have to fight are those of your level, which thus leads to people being super conservative and leading to great endgames, sometimes that resemble scrims in the higher ranks. For normal people, it will be hard to grasp the concept of competitive fortnite, where players are constantly trying their best at winning every single game, and in the process, they also try their best at employing tactics that are rarely seen into normal matches. Arena has many different aspects that aren't seen in the normal field anymore, and as you progress, it becomes hard to win games and rack up those points to become the king of the lobby. It happens many times that people always choke in the final circles, and then make a small mistake, In the arena, this happens much more, with a lot more people, and much more at stake. it just gets harder to beat as you get better. This guide will have an in-depth explanation of most of the arena's features, and the best strategy to get points. 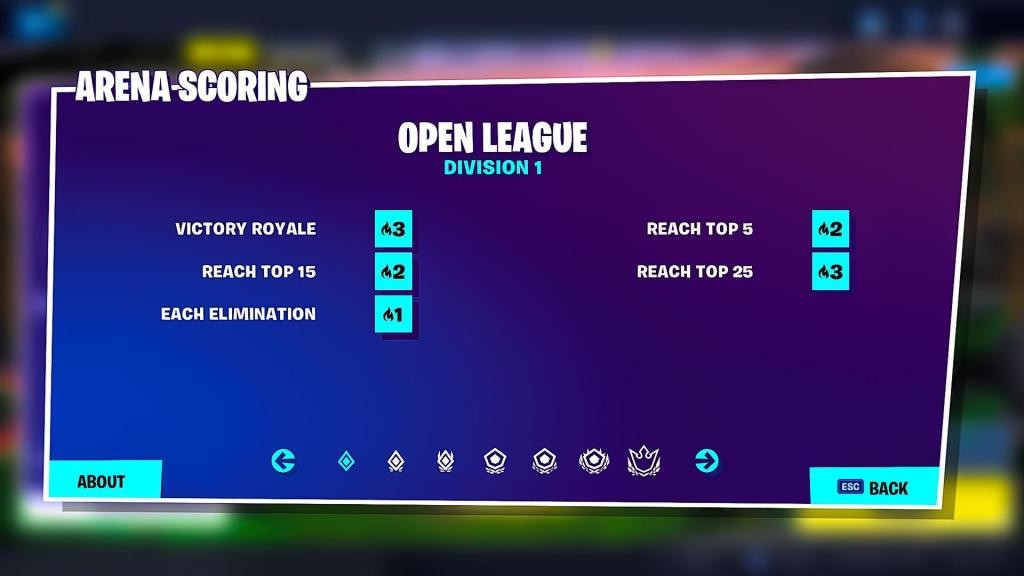 Like mentioned before, people tend to play safer, and That is something that happens in fortnite scrims. In the open divisions, it is possible to do this pretty easily. Pulling off the victory royale is actually easier than some platforms. As you rank up through the Arena, it becomes much harder to win the game. In the champions league, a lot of people also report seeing pro player's name tags or even big streamer's names. The best strategy to earn points is to make sure that you are living longer than everyone else to make sure that you get points. In the lower 6 divisions, living as long as possible is the way to go, and that is exactly what people do. Killing in these leagues gets harder and harder, but avoiding big locations is probably that best thing that you can do is to try and drop in the medium populated zones, which aren't completely isolated that it becomes boring and you start camping. it is important to keep moving into the zones early, and always move to the edge of the moving zones, just to reassure yourself that you come inside zone. Another way to get as many points per game is to try and 3rd party whenever possible, and preferably do it before the other player gets their 50 health for killing that other player. make sure that you are always moving. I think that the arena game mode is one of the best ways to make up ground on stats, and also advance as a player. This is one of the best ways to get good at fortnite, but it requires a lot more skill than the other game modes. The analysis above was only devoted to the things that are different from the normal solo game mode to the solo arena game mode. The way that the updates have been rolling out lately limit the number of materials that a player can carry to 500. You also gain 50 health/shield from every kill, which means that people use a much more aggressive playstyle, which could be bad in some cases. The best way to break even or get more points in a game of arena is to obviously use a more relaxed playstyle that doesn't mean that if you see an easy kill, you avoid it. It is best for tryhards and people who want opponents who aren't so bad at the game. It is referred to by many YouTubers as the game mode that saves fortnite, the perfect game mode.