The game takes place on two islands, the main being Altis1, the second Stratis2. The islands are strongly inspired by two Greek islands called Lemnos1 and Agios 2Efstràtios, although their areas are slightly smaller than the original islands: 400km2 announced for Altis (instead of 478 km2, 85% of the scale),
30 km2 for Stratis (instead of 43 km2, or 70% of the scale). This represents for Altis an area of ​​play equivalent to the cumulative maps of Takistan and Chernarus. In addition, the developers have announced the possibility of exploring the seabed on the equivalent of 100 to 150 km2.

On the main island,
most of the towns and villages are reproduced, about fifty or so. The island has been slightly modified for development purposes. Thus, some lakes east of the island are absent. A possible explanation would come from the fact that the game takes place in 2035.

By playing this game you can get 100 Play
The scenario starts on July 7, 2035 at 5:15. The player leaves a NATO base being dismantled on Stratis, when he discovers on the road, near a burning vehicle, the corpse of Colonel MacKinnon, the commander of the Aegis force responsible for peace in the republic of Altis.
At the same time NATO is under fire from an unknown enemy, who turns out to be the AAF, his former ally. The player folds in the forest. A little later, when his only companion, Sergeant Adams, stepped on a mine, Kerry finds himself alone, but manages to join a group of other survivors who are hiding in an abandoned base.
These survivors begin guerrilla warfare against the AAF and then come into contact with their command. It is then decided that they will attack the AAF to facilitate the disembarkation of NATO troops to retake Stratis Island. But this plan runs out when the CSAT intervenes to support the AAF.
The survivors then decide to leave the island to fly to Altis to contact the FIA ​​rebels, but they are intercepted by an AAF aircraft on the way. 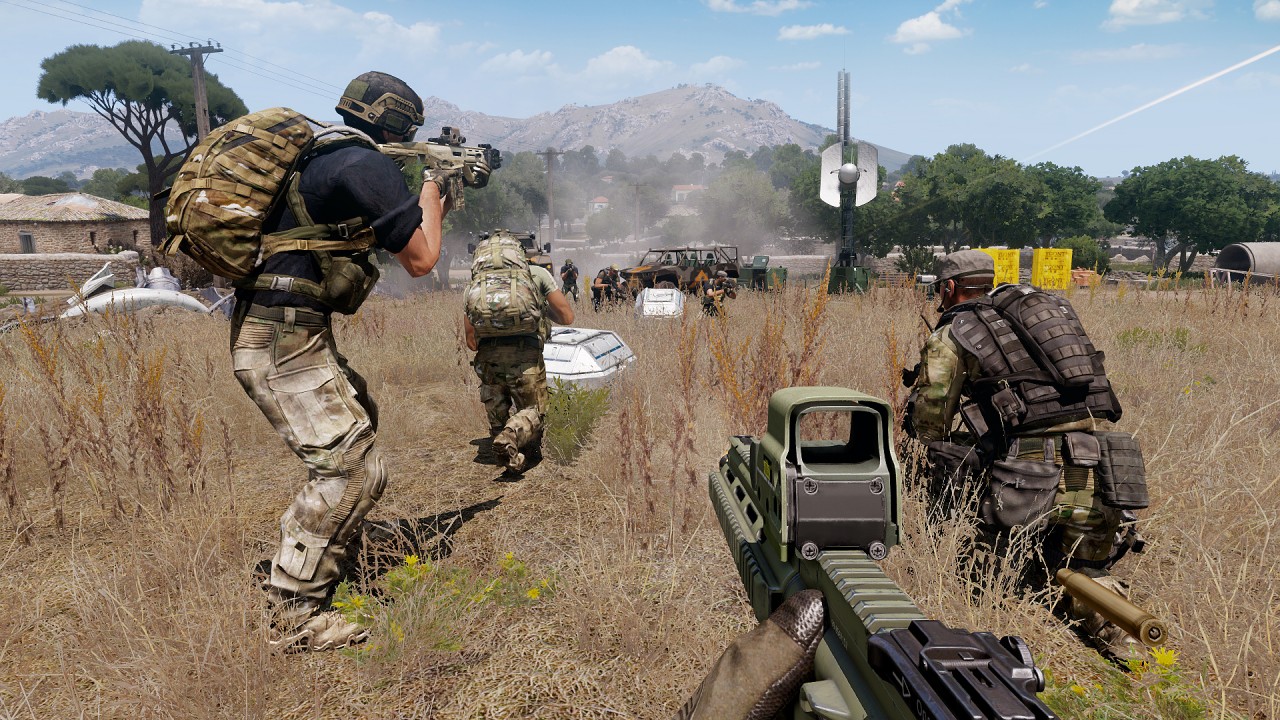 100 Play
The last episode begins in Stratis, on the air base taken over by NATO forces, Kerry is seen strangely on the part of the soldiers who considers him a guerrilla (despite the fact that he was under NATO mandate before the attack flash of the AAF). A conversation between the officers and Kerry takes place,
explaining NATO's current situation and future operations, the colonel also explained to Kerry that if it is possible to return to combat it is thanks to the NATO staff that gives him an opportunity to return however, the Colonel, very little appreciates this good news for Kerry,
and warn him that any wrongdoing or if he put the life of another soldier in danger he would be demobilized.

After this "mission" Kerry finds himself again on Altis under the command of a small team, he aims to monitor a dump located about five kilometers from the front.
When Kerry notices an inflatable boat coming to the coast, he is ordered to return to his team for regrouping. At the same time, on three specific points, explosions sounded, these points are DCA stations that were destroyed by the enemy forces,
when Kerry reaches his team he finds them all dead, it is announced on all the radios that a counter-attack is in progress, Kerry regroups with a mechanized squad, when an unknown call (which turns out to be a member of the FIA that Kerry knew) says guerrilla forces are attacking OPFOR air forces.
Kerry is (against the colonel's heart) placed at the controls of an FIA squad to support the counterattack and resume lost lines. Successful counterattack successfully.
842 0 Share
5.0 (1)