'Experience true combat gameplay in a massive military sandbox. Deploying a gigantic variety of single and multiplayer content, over 20 vehicles and 40 weapons, and limitless opportunities for content creation, this is the PC’s premier military game. Authentic, diverse, open - Arma 3 quite simply, sends you to war.'
Terrain: Defeat your enemy on a richly detailed, open-world battlefield – stretching over 290 km² of Mediterranean island terrain.
Singleplayer: Follow the story of Ben Kerry, a soldier who gets caught up in a Mediterranean flashpoint, across three gameplay-driven campaign episodes: Survive, Adapt, Win.
Multiplayer: Fight online in the massive military sandbox that is Arma 3. Form a squad and team up against your enemy in the official Defend and Seize multiplayer scenarios.
Content Creation: Start creating your own experiences with Arma 3’s intuitive scenario editor and powerful modding tools.
Revamped Engine: Navigate the battlefield with fluid new animations; feel the devastating power of combat with the upgraded sound engine, new ragdoll simulation and PhysX™-supported vehicles.

The sheer scale, depth and freedom will draw you into this full-scale military game and fill up your time, engage friendships, your instincts and your mind, as it expands your awareness of military and combat elements. Move out! 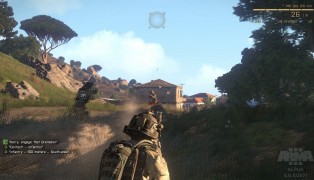