Correct placement and maintainance of Buildings

Engineer is one of the best defensive classes and has many buildings on his side to strengthen his defences. An engineer can counter almost every class in the game. His Sentry Gun, Dispenser, and his teleporters allow him to play both aggressively and defensively. He also has a very big arsenal that affects his playstyle even more. As an engineer, the buildings are like your best friends. You should never let your buildings be sapped or destroyed. The best way to protect your buildings and get the most out of them is the placement. Just because you're hitting that sentry gun continuously with the wrench doesn't mean that your engineer's nest will be safe. If you don't know what an engie nest is then it is a group of engineers' buildings built in the same place. Engie nests are very easy to destroy for good players. Engie nests are mostly made for dealing with spies, but most of the good spies will get past them. Good engineer players split up the places where they build to prevent their enemies from destroying all their buildings in a short time. The location where you built depends upon you. A good place to build varies from map to map, So you will have to figure them out yourself. 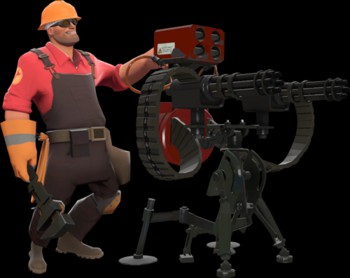 There are many qualities which make a place good for your buildings. The first thing to look for is some cover. If you place your buildings in an open area then they will be very easy to destroy. Snipers would target them first and it won't be a big problem for other classes in the game either. When there is some cover for your building then it will be easier for you to maintain them. Unsuspecting enemies could walk past your sentry guns and die before even knowing about the buildings. When a building is covered from most of the sides, the enemies will have to send a spy or an ubercharged heavy to deal with those. Having another player near your buildings will also help. Sometimes you need to collect some metal or do something important. When you are far from your buildings there is a very high chance that a spy would sneak up and sap your buildings. Having another player near your buildings will greatly minimize the chances of an enemy player destroying your buildings. Having someone like a pyro with the homewrecker is even better. When looking for a place to build your sentry guns, look for a place where the enemies pass by most of the time. This way it will help you block the enemies from the objective and help your team. Place your dispenser where your teammates retreat most of the time. This will help your teammates to get health and ammo faster. When placing your teleporter exit try searching for a place which is safe but close to your enemies. When you are using the gunslinger place your sentry guns behind the cover but close to the objective. This will give an advantage to your team by providing another source of damage. Use the high ground to make your sentry guns even more powerful. Something that new players don't think about is a big bubble around you when you are placing down a sentry gun. This bubble resembles the auto-aim range of the sentry gun. The sentry gun won't lock into any targets outside its range. You can make your sentry gun shoot much farther using items like the wrangler. Make sure that your sentry can shoot around in most places while being safe. Keeping your sentry guns which can block the enemies from reaching the objective is the best thing to do. This can be called are denial. As an engineer defensive pyros also known as pyros are your best friends. Pyro players using the homewrecker can remove saps from buildings and also can spycheck. Because of these reasons having a puro around your buildings is very beneficial. Well, that's it for the buildings there is much more to know about placements in the game. You can see what works best for you by practising against AI. Thank you and have a very good day.