Hello everyone, today let's talk about the spy. But before we start talking about him let me warn you that soy is the hardest class in the game in my opinion. To be good as a spy you need to learn many techniques and strategies. Spy is a french guy. As his name suggests he is a spy. Spy is complex because of this. Spy in team fortress 2 is not only about backstabbing enemies but he was intended for getting information about the enemy team. Just like scout the spy also has a very low health pool with only 125 hitpoints. His health can reach up to 185 while being overhealed. Unlike most of the classes, the spy's health can be minimized to 70 hitpoints with the conniver's kunai unlockable. Spy is also very versatile but not in the way you are thinking. Spy is special because he can play in both teams at the same time. I mean that the spy can disguise himself like one of his enemies.
Another ability of the soy is to cloak himself. When you press the alternate fire button the spy will pull out his watch. This watch allows him to cloak himself. This watch is so useful that the spy will that you can win the game alone with this. Maybe winning a match alone is too much but you will trick many enemies and will be able to get a lot of information.

Since we were talking about his watch let's talk about his loadout. Spy has a large loadout consisting of his revolver, sapper, butterfly knife, Invis watch, and his disguise kit. His invis watch and his disguise kit are contraptions but the invis watch is still replaceable with its many alternatives. The stock revolver is his primary weapon. It is not used much since you always spawn with your knife in your hands. Most people use spies as a flanking class so they only use the revolver to finish off enemies or to deal some chip damage to the enemies. Now since this weapon is not used so much there is no need to replace it. Even then I would highly recommend replacing the revolver with the L'Etranger. The L'Etranger will allow you to stay cloaked for 40% longer and will also recharge your cloak when you hit a shot with this gun. The only disadvantage to this weapon is that it has a 20% damage penalty but still it is worth it for its advantages. Talking about his sapper there is only one use to it which is to sap enemy buildings. Sapper also has one real alternative if you ignore the reskins for it. Its alternative is the red tape recorder which is completely useless. That's it for the sapper. Now let's talk about his knife which is probably the most integral part of his loadout. The stock knife can one-shot enemies if you get them with a backstab. It's simple but you should not forget that it can also be used for poking your enemies. This weapon has many alternatives but I can't recommend any because all of its alternatives require you to completely change your playstyle. Because of the shift in playstyle that you require to use its alternatives I highly recommend you to stick with the stock knife for a few weeks. His disguise kit is just like how it sounds. It allows him to disguise himself as anyone, be it from his team or the enemy's team. This item is a contraption and you can't replace it. The last item in his loadout is the invis watch. This watch allows him to be invisible for some time. The cloak has a recharge timer which will continuously recharge while you are not in his cloak. It can be recharged by ammo packs. The default invis watch is really good and I wouldn't recommend replacing it with other watches for your first few games as the spy. The invis watch has two alternatives. The first one is the "cloak and dagger". 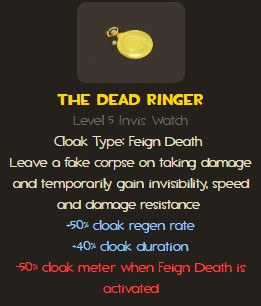 The cloak and dagger allow players to recharge their cloaks even when they are inside the cloak. If you stand still while you are inside the coak, the meter will automatically start to fill up allowing you to stay cloaked forever. But you can't refill your cloak using ammo packs while you are still inside the cloak. The second one is the "dead ringer". If the name did not make it clear to you then I will explain it to you. You can't normally cloak like other watches with the dead ringer. Instead when you press the alt-fire spy will just pull out the dead ringer and nothing else won't happen. But when you receive damage when your dead ringer is out you will turn invisible for 7 seconds. If you still don't understand what I mean then the picture above should clear your doubts. That's it for spies loadout. I talked a lot about the spy's loadout because the spy has a massive loadout but also because I have no actual advice for newer spy players. There is only one piece of advice for anyone interested in playing spy and That advice is to develop some game-sense. Now, the game-sense is a very complex topic and if you don't know what it is then let me simplify it for you. So, game-sense is the ability to predict the things that are going to happen in the game and be able to react to any scenario before it takes place. This is not the only definition for game-sense. Some professionals define game-sense as the overall knowledge of the maps, weapons, characters and other small aspects of the game. This is useful for spy players because playing spy requires you to predict where the enemies are, find escape routes, and find flanking routes. All of this knowledge will come the more you play the game. I already warned you that Spy is a very hard and complex class so if you want to play him I wish you the best of luck. That's it for today, have a very good day.