A Review of Gigantic by A Casual Player

Looks like i'm the first one to write about Gigantic, maybe not. I may not have 1000 hours on the game, but I've played it for a bit and watched some videos of it. I'll admit it has been sometime since I've played the game Gigantic is a hero based shooter where your objective is to attack the enemy guardian. You can attack the enemy guardian by getting kills and collecting orbs at certain points, 10 for each kill and 20 for points, once you have 100 points you can attack. The guardians both have 3 hearts when one team is attacking if the guardian health bar is depleted they lose a heart. Once a guardian loses 3 hearts one team wins the other loses. When one guardian gets to 1 heart or there have been a certain amount of attacks the game enters clash mode where the map shrinks and the game goes a lot faster. This game requires a lot of teamwork to be successful.

By playing this game you can get 100 Play
The characters are very diverse and play in different ways. Some of them use melee attacks while other characters use guns, bows, and energy blast. Each character also has their own lore which you can find out more about by reading the descriptions of their skins. You select the character(s) before you queue for a match. You then choose that character and you're locked into that character, no switching. You have to be sure that's the character you wan't to play. In terms of unlocking characters you can either buy them or earn coins by playing the game and unlock them 1 by 1. You can also use the coins to unlock customization for the characters. You can also complete challenges to earn currency, or buy in game money to customize characters. It will take a lot of time, probably days depends on how long you play, to actually unlock all of the characters, so if you have the money and love the game I would recommend just buying them all by becoming a founder. 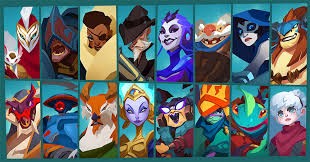 100 Play
The problems I had with this game, which may be fixed, are leavers, how much you earn per game, and character balance. The problem with leavers is they're to frequent and it's incredibly difficult to win a game without all 5 members of a team. Every time someone would leave a game simply because they didn't like how it was turning out. However I've heard that there is actually less leaving in this game. The second problem is how much you earn per game. I takes a lot of time to actually unlock a character and there is much more to unlock other than characters. It takes a lot of dedication to unlock all the characters in the game without buying the founders pack, so I would definitely recommend buying it. The other problem is hero balance, it's not too much of a problem actually just 1 or 2 characters could use a change like Lord Knossos is definitely too strong for someone so basic. If you're looking for a diverse shooter on the market I would definitely recommend Gigantic.
P.S it's in beta still and it's about to be out of beta.
1609 0 Share
5.0 (1)