Set in the Titanfall universe, Apex Legends is a battle royale style first-person shooter, with a little spice of Team Fortress 2 or Overwatch.

Respawn Entertainment since its inception emerged as a developer hidden in many surprises. The 2014 Infinity Ward veterans were the year of the giant robotic battles, while 2016 showed a Titanfall 2 with impressive single player and excellent multiplayer mode. And surprisingly this year, it was Apex Legends.

Set in the Titanfall universe, Apex Legends is a battle royale-style first-person shooter, with a little spice of Team Fortress 2 or Overwatch. You play as one of the eight legends the game offers, teaming up with two other players to team up against 57 enemies to see which team stands to the end. That is enough to show a clear difference between Apex Legends and rival games such as Playerunknown’s Battleground or Fortnite. But Respawn Entertainment's brainchild does more than that.

The first thing you will notice when entering the game is the almost absolute smoothness in controlling the character. Although you can no longer run on walls like in Titanfall, Apex Legends still knows how to create a smooth rhythm in the game circuit with very low key lag. You can swing, turn on the wall or slide the ground; all of which build one of the fastest and most diverse shooting products on the market today. Want to get out of a fight quickly and know you're sure to lose? If there is any slope nearby, just slide away as if nothing happened. Want to ambush and surprise opponents? What could be better than climbing on the roof of the house and beating him up from above. The game has absolutely no damage when jumping, meaning you can comfortably fall from 17 floors to the ground without scraping. This encourages players to keep moving, especially when your enemies are too. The tactical element of Apex Legends, however, not only comes from the speed and approach to the goal, but also from the diverse gameplay that not only includes running and shooting. You still jump from the top to the map at the beginning of the game and other elements of battle royale, but with the three-person squad design, the battlefield is now a playground of 60 individuals divided into 20 competing teams. jerking life. Teamwork is a must if you want to win, and the developer certainly agrees with this. The proof is that in Apex Legends, when a team member is knocked down, if you're quick and lucky to get their banner back (like a name tag), you still have a chance to revive your teammates if you bring your banner that points to certain points on the map. This adds a significant depth to Apex Legends, as even if there is only one survivor, the chance of the team holding hands to win is very possible. But do not be subjective, because your enemies can do the same thing. No one who knows for sure that the friend you lost at the beginning of the game will not return to the full team and make your whole team late in the game. 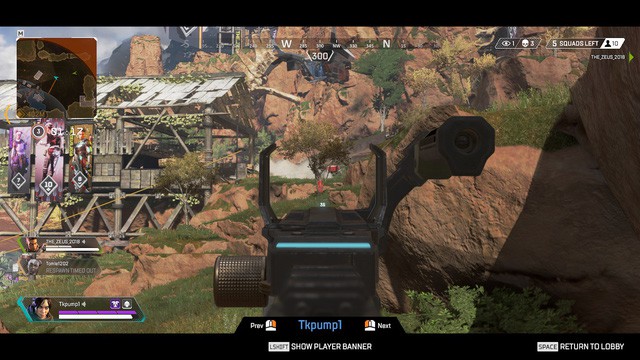 Legends are an integral part of Respawn's game. There are six legends to choose from (eight if you can unlock them) and each has different skills. Lifeline can heal allies, Pathfinder has a hook to increase movement speed or Wraith has the ability to run into another dimension, immune to damage for a few seconds. Each legend has two such skills, and they are different enough to create a unique identity for each character, but not too strong to make one legend stronger than another. The fact proves that Apex Legends is one of the most balanced games the writer has ever played. Regardless of which character you choose, the advantage is always shared between you and your opponent. Bangalore's bombs are not stronger than Gibraltar's shields; The difference lies in the level and mind of the player. And although it is based on microtransaction, the in-game purchases are decorative, and the two unlockable characters are no more powerful than the other legends, so you can rest assured playing without fear of being Pinched by other players more money.

A special point that the writer thinks that any game needs learning, is the ping system. Apex Legends not only supports normal voice communication, but also integrates an equally effective way of conveying information. By default being the middle mouse button on a PC, the ping system allows you to point your finger at the object you want to refer to and press the button to do so. Pointing at the opponent, your character will automatically notify other players of the presence of danger. Point to loot chests, items, locations, etc. and similar notices will appear for the entire team.
285/5000
This is a simple idea, but it is useful and smartly handled, which makes the teamwork ability of the whole team improve significantly. Instead of sitting and trying to hear what your teammates say, a button will replace all that suffering and inconvenience.

At the time of writing, Apex Legends has only one battle map, but its quality is undisputed. Kings Canyon is a map large enough for 60 players, that is if you care about the area. As for the design perspective, Apex Legends has a map with a full range of elevation, context and beauty. You may be shooting each other in a cave in a canyon, at other times you may be fleeing to find cover amid a burnt forest. This difference in context allows the gameplay to grow in depth: the factory may have a lot of loot, but too little cover, or this sniper point has an easy way out. The only minus is that in some hidden places, Respawn Entertainment may not have considered that the player can camp quite easily and accidentally break the game circuit. Although this is very rare, it can be considered a rather unfortunate mistake.

Apex Legends is the most complete battle royale experience you can find right now. The addictive gameplay, the high tactics and the near-perfect balance of gameplay make Respawn Entertainment's brainchild a must-try product at least once in a lifetime.

Apex Legends is now available on PC, Playstation 4 and Xbox One.

A few minor flaws in the design