The Cost of Admission

When starting this game I was immediately taken back to a time when i was scarfing down pizza pockets and watching the best T.V ever to exist .

This game plays hot and heavy with your nostalgia strings and takes you outside of your comfort zone quite early and often. Those looking for a reprise of the original will find a lot to like here but the game does have its issues .

This time around the game relies too heavily upon the dungeon action hack and slash and not nearly enough on the deep role playing of yesterday , That is not to say that this game has no merits but simply that it could and perhaps should have stuck a bit closer to its family ties to satisfy those of us who can still remember its legacy well. That I would say is my biggest issue with Neverwinter . The game tries so hard to bank on the nostalgia of a classic franchise and it just fumbles the ball in a few areas that could really have made it shine . It is as if the developers wanted it to be an homage and continuation of the caliber of previous iterations in the franchise but were terrified to actually commit whole hog to the idea of recreating that actual game type in the end .

By playing this game you can get 1070 Play
Newcomers to the game will certainly not notice these short comings and find themselves waist deep and confused in the fast pace and unclear way the early game gets quick fired out to you . The intro is great but for some reason I lost any real attachment to my character quite quickly after the beginning few hours .

The battle system is quick and relatively painless to pick up and blast away at things doing good amounts of damage and progressing along with the opportunity there for those who would like to delve deeper into its spell and armor crafting ... perfecting the damage you do by pouring over web sited and researching ... I myself lost interest in that after my WoW decade or so .

Should this game be thought of in a higher regard based upon the fact that it costs TECHNICALLY nothing to play? I have always been against that point of view myself . I would never be lenient upon a game simply because i didnt pay anything for it , I would however have my opinion of a game overall influenced if a game was both free and great fun to play (I'm looking at you hearthstone) and I feel like this game falls in between two extremes. 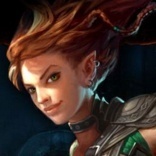 1290 Play
On the one hand if you are bored and have an itch that needs scratching in the form of a modern type Neverwinter game than this MIGHT be what you need for a temporary fix to get by .

On the other hand you may be better served actually spending some of your hard earned cash on a full fledged epic yarn of a tale ... something meatier simply because the developers were only trying to deliver a great game and not a Trojan Horse to pedal their micro wares and get you the people to buy their micro transactions .

Is this game a decent romp to spend some time in? Sure .
Is this going to change your opinion on the genre and challenge previous notions of what makes them great? Absolutely not .

What do I rate the game? Average

My rating scale from low to high