Akinator was released back in 2017 yet is still discussed and used over a decade later. It is a very simple yet addicting game that you can either download on mobile and pc respectively or simply play for free just by typing it in almost and any search engine. The premise and gameplay is simple as you choose a category either Category, object or animals. Then you will be asked a series of questions to which you can reply: Yes, no, I don't know, probably or probably not. This will continue as you can read the genies facial expressions as to see if he feels he is getting close to the correct answer. He will then display their name and photo and allow you to tell him if he got it right if not you may allow him to try again or tell him the true answer, this means you have defeated the akinator but also means you have added to his data base meaning next time he will be even harder to defeat. This is the only updates per say that akinator has had all these years yet this allows him to still be effective to this day. 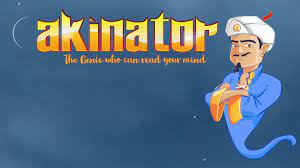 It is interesting to note that akinator is not a game for English players only. While the game is available in English it is also available in: Japanese, German, Portuguese, saudi arabian, Korean, Italian, French, Spanish, Russian, isralian, Chinese, Turkish, Netherlands, polish and Indonesian. I must give a humongous kudos to the team behind akinator for this a it means the game can be appreciated worldwide and allow for gamers of all languages and backgrounds around the world to have a common ground game they can all enjoy. It also helps with this that this game is free for all meaning any economic status with access to Wi-Fi and a search engine can play this game. Also it appropriate for all ages to play as it normally guesses the character or a very similar one to what you are putting in the search engine. It can guess adult film actors too and ask questions relating to this but often you have to be thinking of them to be asked these so it often will not occur unintentionally. As for my pretty lengthy experiences with this game I would say considering it is a free search engine game it is high quality. there is times where it can miss the mark by a long shot but there is also times it can grasp even the most obscure reference to the character and be 100% to your thought of protagonist. Also there is the rare but still occasional lag or freezing but this may be the fault of the engine being used or your connection not the game itself so it cannot truly be faulted fully for this minor issue. While I personally would not pay to use this app I would say the quality is on par or superior to many mobile apps people are willing to pay a little bit of money for. it is also nice that since it is on a engine it does not interrupt your game with obnoxious adverts or sponsors that have miniscule exit buttons, this is a breath of fresh air as nowadays these types of advertisements are practically inescapable. To conclude akinator is a oldie but a goodie search engine game that is free and certainly approved by me as a loveable time waster.