Do you play pyro? Or do you think pyros are annoying? In team fortress 2 most of the player base who do not play pyro think that pyro is a class that doesn't require any skill at all, They think all you do as a Pyro is a WM1 Push to set your enemies on fire and annoy them. I disagree with the player base because I think pyro is a very complex class and requires a lot of skill compared to any other class like Medic. Pyro is a very versatile class because Pyros can play offensively, and defensively. Pyros are also amazing for flanking and dealing huge amounts of damage. Pros can change their playstyle because of the variety of weapons and items that the game provides to the player. Pyro excels at a shorter range. Pyro has a default loadout which is completely made for short range because none of his weapons in the default loadout can deal damage far away. His default weapons are the stock flamethrower, the stock shotgun, and an Axe. The only way to damage enemies that are far from you is to airblast the projectiles back at them. You can add other weapons like the flare gun or the scorched shot as your secondary to fire your enemies from a very long distance. I use the flare gun for long-distance fights because it gives you a guaranteed critical hit on any enemy who is being damaged by fire. This kind of secondary weapon can also be used with the dragon's fury flamethrower. The Dragon's fury flamethrower does not spray out the fire instead it throws a projectile that can go very far. 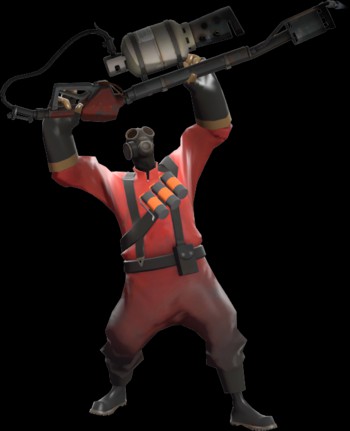 The reason I recommend dragon's fury is because it does 300% more damage to players that are already on fire so you can two-shot most of the light classes in the game like the scout. The dragon's fury can be unlocked for free by doing the dragon's fury contract in the pyroland section. Pyro is a very good class for flanking your enemies. Pyro has many weapons like the backburner or the Thermal thrusters to can't your unsuspecting enemies. The backburner can melt your enemies in a few seconds it deals critical damage if it hits enemies back. The thermal thrusters are just like jet packs they allow you to fly for a short time. You can use the thermal thrusters to skip the enemy frontlines and attack the weaker enemies on the back of the enemy territory. Thermal Thrusters also deal damage if you land right on someone or if you take off near someone. You can crush your enemies to death with the thermal thrusters. It may not be listed in the item's info but you can extinguish friendly players with your Thermal Thruster and it makes no sense to me. The Backburner and the Thermal Thruster are a good combo if you want to flank hour enemies and finish off any snipers or engineers that are annoying from the other side of the map. 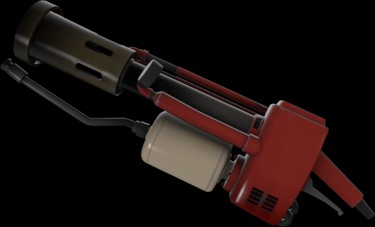 One of the few things that Pyro Players seem to forget about is the airblast. If you don't know then Airblast is a way to repel enemy projectiles right back at them. You cannot Airblast shotgun, sentry, sniper or almost any kind of bullets in the game. You can Airblast things like rockets, sentry rockets, huntsman arrows or any other kind of projectile like that. Airblast can be very useful when a cluster of enemies are in front of you instead of burning them which makes them die slowly, you can just throw their projectiles back at them at the cost of some amount of gas. Almost all Pyro weapons can airblast excluding the Phlogastinator because it is an electric weapon. Well if you want to master pyro then you need to master the nook and cranny of the map that you are playing in. Pyro is a good class for close-range fights or to push large groups of enemies back to their territory. Pyro is very fast so getting chased by a pyro is not a pleasant thing. Pyro can airblast to extinguish teammates from fire and can also deal damage to enemies with his airblast if they are close enough. Pyro can also push back enemies or throw them off cliffs with his airblast. All I want to say is that there is a lot more to pyro than just his flamethrower and there are a lot of weapons that you can utilise as a pyro. Pyro has many play styles all requiring different load-outs and mindset. That's it, Thank you and have a good day.