Rage War is the cross-platform city building strategy. The developers are Fury Studio and publishers XS Software. It’s a free to play game for browser, PC or Mac mini-client and also on Android and iOS apps for mobile. The game revolves around Leonardo Da Vinci and his time machine, setting up for an alternate universe where after an accident the player is blasted back to the Stone Age. From here the player has to build up his/her settlement like any other Civilization based strategy title, unlock new technologies, improving buildings and units.

The opening cinematic was the best part of the game. It almost felt like the team blew their budget on that but once you got to see the in-game graphics which were pretty poor. Not so good animations and bad graphics makes the game look years old. The screen is all big and chunky to make it appropriate. By playing this game you can get 100 Play
The combat is quite similar to mobile game giant Clash of Clans. The game has decent strategy involved and I had to plan my army formations and troop movements to actually win otherwise it would have resulted in defeat.

Outside of the combat the game does not have much unique to offer. The things are same as most other similar games. Building settlement, creating troops, researching technologies and a decent PVE combat system. The game has a global map where you can locate other players and attack them to get loots.

The game is quite heavy on the pay to win side as expected from all the online strategy browser games having PVP combat. The game is hard for F2P players and also it takes a lot of time to progress in the game if you are F2P as opposed to a non F2P player who can basically reach high levels in a single sitting. 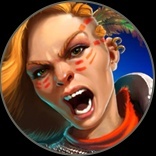 100 Play
This game could have made improvements in a lot of fields to compete with the top tier games. First and the most important is graphics, change in the way combat system works for an interaction between a high level player and a low level player etc.

To me it feels like, for the most part, Fury Studio have managed to get rid of a lot of the tedious automated content that a lot of other strategies use. The combat is definitely strategic with players able to choose their army composition as different units benefit in different ways. Aside from the rather poor graphics I would say that given that it’s cross-platform it is kind of an ok game.

To conclude, there are a lot of better games out there if you want to put your money in the game. I do not recommend this game at all as there are lots of new strategy games out there with far more unique management, combat and strategy challenges.
1171 0 Share
5.0 (1)