If you are somewhat new to this game and don't know how to use each turret/hull, this is the place to be.

Let's start with the two most basic turrets: Smokey and Thunder. They deal moderate damage at middle range. The difference between the two is that Thunder deals splash damage that can also damage the user, while the Smokey can deal critical damage. The two turrets decrease in damage the further the target is. They are recommended for any player who wants to be in the action, but stay safe. The Vulcan is a middle to long range machine gun type turret which is very good at locking onto targets. However, if used too much, the user can start taking burn damage. Another middle range turret is the Ricochet, which fires shots that can bounce. Like the Thunder, there is a chance of self damage. Using the Ricochet efficiently requires skill in order to hit a target with a non-linear path. Because it bounces, this turret is especially powerful in tight hallways and areas. The Twins is a short to middle range turret that can fire constantly, but once again, also risks a little self damage due to splash damage. It is a good turret for beginners because of its high fire rate and damage. According to the Garage description, it "serves as psychological warfare to irritate and distract enemies."

The short range turrets are the Firebird, Freeze, Isidia, and Hammer. These are most efficient with light, fast hulls so the user can move into the turret's range. The Firebird is a high damage turret that deals burn damage and removes the frost debuff, dealt by the Freeze. This turret is similar to the Firebird, except that it freezes the enemy tank, slowing it down. It also removes the burn debuff. Both turrets are best used very close to the target while staying away from where its turret is facing. The next turret is the Isidia, which damages enemies, but heals friendly tanks. Obviously, it is most effective in team battles. The Hammer is a shotgun-like turret that fires a high damage blast of pellets. It has a clip of three shots which can only be reloaded if all three are used. It can bounce off walls once, making it more effective in small areas. There is a risk of self damage with this turret.

In the image below, I am using Freeze to trap the target while using a light hull to evade their turret. By playing this game you can get 100 Play
There are multiple long range turrets, which are the Shaft, the Magnum, the Striker, and the Railgun. They are best paired with heavy hulls so they can soak up damage in the case that it cannot fire. You will see what I mean. The Shaft is your typical sniper turret. It has a high damage long range shot, but with a long reload when you hold the fire button (Space or mouse). Alternatively, you can tap the fire button once to release a quick but weak shot. Along with that, when you see down the scope to aim, you emit a laser line between the point you are aiming at and the tip of your turret. This turret is very bad in close range battles because of its low damage, rotation speed and reload. But in the right hands, it is capable of destroying entire tanks with one shot. The Magnum acts as a mortar, launching an explosive round in an arc. Because of this, it can fire over walls and buildings. The catch is that it cannot rotate, instead changing the angle of the round. The longer the fire button is held, the further the round goes. There is no guide line, easily making the Magnum the hardest tank to control and master. Of course, it has a self damage risk. The Striker is a long range turret that can either fire one missile with a tap, or lock onto a target by holding and launching a flurry of missiles. Like the Shaft, there is a laser line visible when locking on. Self damage risk. Finally, there is the Railgun, which is a fast, high damage turret. The only warning of a shot from a railgun is the blue glow on the tip of the turret, making it the perfect tank for an ambush. Unlike the other tanks, it is also effective with a light hull because of the speed of fire and the element of surprise.

In the image below, you can see how powerful the Shaft shot is at a distance. 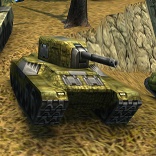 100 Play
Okay, the hulls. Let's start from the lightest hull and move our way up. The Wasp is the lightest of them all. It is very fast, but is easily destroyed. The Hornet is also fast and has more armor, but has little traction and is very unstable. If you're good at driving, this is the hull for you. The Hunter is the Smokey of the hulls: moderate speed, moderate armor. The Viking is the opposite of the Hornet: Extremely stable, slower, and even more armor. The Dictator is a somewhat heavy hull, but the turret is mounted higher up. It allows the user to fire from higher up, but makes them a larger target. The Titan is slow and armored. Not much to say there. The Mammoth is the Titan on steroids: A ton of armor, but very slow.

Although paint to most people is for aesthetics, it can be very useful in battle as camouflage. For example, it is really easy to see a green tank in a snowy map, but not a white tank. It is good to have multiple colors of paint to adapt to the map you're playing in.

Protection offers... protection from certain turrets. When you buy protection, there are symbols on each module. Smokey is a lightning bolt, Thunder is an explosion, Vulcan is a stack of bullets, Ricochet is a bullet bouncing off a wall, Twins is three green bullets, Firebird is fire, Freeze is a snowflake, Isidia is a blue ball between grey shapes, Hammer is a spread of pellets, Shaft is a crosshair, Magnum is a mortar, Striker is a rocket, and Railgun is a blast of blue.

Thanks for sticking around until the end. Hope this helped others learn about the different equipment!
1203 0 Share
5.0 (1)