Team Fortress 2: The best class based fps out there

Having acquired 450 hours on Team Fortress 2, I can honestly say it's one of the most entertaining, addictive and rewarding games I've ever come across, it's fun wacky characters and colourful, lively gameplay is second to none. It has a surprising amount of new and old players to keep the servers booming.

Plenty of new regular content to keep players interested alongside the millions of customizable outfits and thousands of valve-made and community-made maps and servers. In my honest opinion, it's the best fps out there and the best part? It's completely free. The community is wholeheartedly the best I've seen for a game for a long time, the amount of tf2 lore, fanart and fan made films is phenomenal. There are also a ton of tf2 YouTubers out there to help new players understand the game better. By playing this game you can get 100 Play
The gameplay is easily understood and straightforward, and although there is a lack of a story mode to help early players along, it all comes in time. There are 9 playable classes: Scout, Soldier, Pyro, Demoman, Heavy, Engineer, Medic, Sniper and Spy. These classes all have their own unique play style. For example, do you like to sneak around unnoticed and attack your enemies from behind in the blink of an eye? Then the spy is for you. Or do you prefer to unload 200 two hundred dollar, custom-tooled cartridges at ten thousand rounds per minute at your enemy? Then you'll enjoy playing as the heavy. Or perhaps you enjoy burning whole towns to smithereens and splicing open innocent bystanders on the head with an axe. Then the pyro is the class for you, you monster. The great thing about these classes, however, is that their 'loadouts' are completely customisable and you can swap weapons around at free will, not to mention the plethora of fun and unique hats that build the tf2 community. 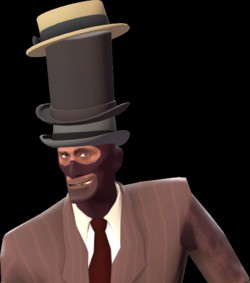 100 Play
Now approaching its ten year anniversary, Team Fortress 2 has truly stood the test of time, it continues to amaze and entertain thousands of players to this day. With an ever growing community and an ever expanding universe, Tf2 is hands down my favourite game to play and one of the most enjoyable game experiences I've ever had. It's also the only game, to my knowledge, where you can meet an untimely demise in so many hilarious ways, including being bludgeoned to death with a fish or a neon sign, being stabbed with an icicle or simply having a man with a rocket launcher and a pair of fashionable boots land on your head it's hard not to chuckle at the sheer variety of unexpected and unprecedented deaths you will surely meet playing this game. Its wide array of game modes, play styles, maps, cosmetics and its huge fanbase overshadow similar class-based games like overwatch and paladins. I would strongly recommend Team Fortress 2 to all who own a computer and half a brain.
(You can download Team Fortress 2 from Steam for free)
1666 0 Share
5.0 (1)