I'm personally glad that Valve released Team Fortress 2. It incorporates very cartoonish, and despite that, improved graphics along with impressive gameplay. The sequel of Team Fortress Original has a very fresh look and feel. What makes it very fresh and attractive is firstly the price. The price isn't just low - there isn't a price! It's absolutely free. But that isn't the main aspect which makes the game so great. The two main aspects include immersive graphics and undeniable impressive gameplay, filled with action, laughter, and surprises. But before i can begin, i will need to explain briefly how the game works. There are nine types of people on a team - Spy, Pyro, Soldier, Heavy, Medic, Sniper, Demoman, Scout and Engineer. Each class has three types of weapons which they can attack with, just like in CSGO. The first weapon is usually the most strongest weapon, such as the Heavy's Machine Gun. The second weapon will commonly include a pistol or shotgun. The third weapon is a melee weapon such as the scout's bat. I will go into more details in my tutorial. 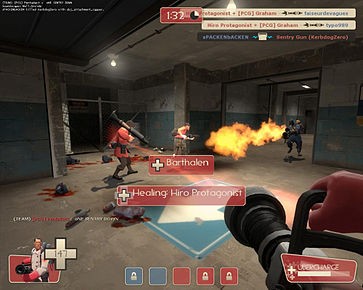 By playing this game you can get 100 Play
The graphics. The graphics are great with a very cartoonish look and feel, as i have already mentioned. However as hardly anyone has noticed, they seem to be getting.... more simple with each year. I was purely satisfied with currently offered graphics, however upon discovering how they have gone backwards over the past 11 years, i am rather upset. The maps look pretty much the same. However, weapons have become less detailed as well as the upsettingly poor lighting. However Valve were able to make up for this, by improving the characters' looks such as improving shadow effects on the arms, the face and the body. Overall, taking in account the positive and negative changes the graphics haven't become better or worse. I would be expecting for very large positive graphic improvements in such an extensive period of time, 11 years. However the graphics still are great, and they still remain very impressive.

100 Play
The gameplay is very amusing because of the creative characters and their quotes which introduce a more lighthearted element to the game. This makes the game different from the other shooters because it is infused with a comicky feel. You enter the game and before you know it, you find yourself on a map of your choice. The maps in my opinion enhance the game because they have plenty of open spaces, and brilliant spaces to hide and give your enemies a bit of a surprise. The maps are very complex and well structured. Each map is different and is not like the other. The controls are just like in any other shooter, making your character easy to control. The actual gameplay is very similar to Half -Life where opposing teams of players have to overcome different obstacles. The combat is very intense, and requires quite a bit of skill to make your team the winner.
I would rate this game a solid 4.3/5. The rating is so good because of the impressive gameplay. However I didn't give it a 5/5 because of what Valve did to the graphics.
1040 0 Share
5.0 (1)