Affected Zone Tactics is the new free online PvP MMO game in which you will take part in incredible tactical battles in turn. In this strategy game you will play the role of a commander of a small group of mercenaries who have dared to enter a mysterious parallel world in search of resources.
You will have to be resourceful and use your strategist skills to beat other players. Participate in exciting PvP battles in order to capture the flag of the opposing team. Fight side by side with your friends, enjoy different styles of play,
numerous classes of mercenaries and the tactical battle system. Do not miss this game and discover all the possibilities that Affected Zone Tactics offers you!

In this free-to-play war game, you will face other players with the goal of capturing their flag to win. Two teams, Alpha and Bravo,
fight a fierce fight in a fight by turn. You will need to take advantage of the strategic Battlefield Affected Zone Tactics and conquer different areas with the support of your mercenaries. Create a clan and plan your actions using the map.

By playing this game you can get 100 Play
Affected Zone Tactics units are divided into four classes and twelve specializations: train elite fighters and test several combinations to create a seamless team. Each type of unit offers different skills,
from the nag in the front line to the cunning spy or the medic who comes to the aid of his allies on the battlefield. In addition, the units can also equip special weapons according to their class, with more than 100 models inspired by the real world: pistols, assault rifles and grenade launcher galore ...

As a commander, you can climb the ladder and unleash impressive new skills as you evolve. Participate in clan wars to gain experience points and reign supreme on the battlefield.
Affected Zone Tactics is a game published by IDC Games, where you can participate in PvE campaigns or take part in skirmish PvP battles. Whether you have little time for play or are ready for long battles, each mode offers different scenarios. 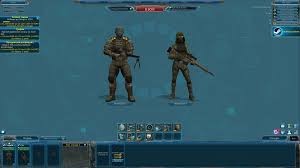 100 Play
An important aspect of Affected Zone Tactics that really defines the strategy element is the line of sight mechanism; players are unable to see enemy units unless one of their own units has a direct visual on them, resulting in a need for a stealth strategy and for setting up ambushes.
Players must work together with the rest of their team and move from one covered area to another, set traps, predict the location of enemies and try to flush them with grenades, attack areas where they think that hides the enemy, even if they can not see it.
Those who rush into battle will soon find themselves shot down by sniper fire, or suddenly surrounded by a group of ambushed enemies; players need to think with tactics and patience, and learn the ins and outs of the game's many cards to be victorious...
712 0 Share
5.0 (1)