Defeating all three bosses unlocks an endgame dungeon that reveals a surprising amount of backstory behind the ARKs and their purpose, which came as a pleasant surprise in a game that’s ostensibly just about riding dinosaurs around and smelting ore on first glance. It’s this narrative flourish more than anything that really distinguishes ARK from its genre brethren. The sheer amount of time and effort required to get there the traditional way is probably more than most solo players have the attention span for – even after more than 60 hours of focused play I had to resort to using console commands to shortcut certain steps just to be able to access the final area in time to write this review. Beyond the bosses, I was highly impressed by the diversity of creatures crammed into each ARK - most of which can be tamed, and many can even be ridden once the appropriate saddle is unlocked and crafted. 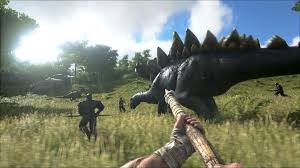 By playing this game you can get 100 Play
From bumbling, docile dodos all the way up to the colossal, carnivorous Gigantosaurus (Latin for “I bet you wish I was merely a T-Rex”), each looks fantastic and has a distinct set of behaviors you’ll have to learn to deal with them. Riding with a pack of direwolves or taking flight on the feathered argentavis for the first time were major highlights of my ARK experience. The process of taming itself is just annoying, though. It consists of knocking your future pet unconscious and then feeding it while it slumbers, waiting for a painstakingly slow (especially on larger creatures) taming bar to complete. It’s the epitome of the “Sit around waiting for something to finish” activities that are ARK’s weakest components. Though ARK has emerged from a long early access period with most of its nastiest bugs fixed, there are still weird graphical glitches all over the place, like shadows popping in and out randomly and intermittent frame rate dips. 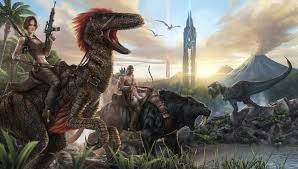 100 Play
Though ARK has emerged from a long early access period with most of its nastiest bugs fixed, there are still weird graphical glitches all over the place, like shadows popping in and out randomly and intermittent frame rate dips. Worst of all is the fact that the AI on larger dinosaurs is pretty terrible. The best strategy for killing anything beefier than a raptor remains getting it stuck on the terrain and plinking it in the head from total safety. Even my own tamed dinosaurs often get stuck in trees when moving through a forest if I don’t babysit them, and in some cases became so badly stuck in caves that I had to kill them to recover the items they were holding and move on.

When I’m having a good time in ARK, I’m having a really good time. The problem is that those moments are usually one part to every nine parts menial grinding and crafting - especially at the later tech tiers. Having to repeat so much work after failing an attempt at a boss feels far too punishing, and some really dumb dinosaurs can take a lot of the challenge and sense of danger out of the many primal locations. Even with all of those quirks, however, I’m still hungry to play more after the 60 hours I’ve spent so far. There aren’t a lot of survival games that have legitimately held my attention that long.
1462 0 Share
5.0 (1)