So I started playing this game a year ago, and I stopped playing it for about a year. I come back into the game and see that I have over 5 million dollars. Yea, yea I know it's a year of not playing but times does fly! Even not playing it for a day or two will get you a decent amount of money if you select a high paying job like the "Bow Hunter".
Anyway, this game is almost as good as Huniepop because its about the same concept, kinda...and this game is free, Huniepop isn't.
Information about jobs~
Active Job Display: The left column shows the promotion details and the visual animation of the job that's been selected.
Promotion Details: This shows the current number of times you completed the job since the last promotion and how many you need in total to get to the next promotion. To the right you'll see the amount of money that will be added to your current pay for that job when you reach the promotion. Note that the numbers later on tend to become larger and will not display all of the numbers due to the size constraints.
Jobs List: The right column displays all of the jobs you can take and the details about them. The scrollbar to the right will help you quickly navigate through them all; you can also click and drag the left mouse button up and down to view them all.
Active Job: Once you've unlocked a job, clicking it will show the play button briefly and you will see something like this. You will see the title and the position on the top, separated by hyphen. Underneath you will see the progress bar of the job, indicating the remaining time it will take to complete one iteration of the job. To the right of that is the amount of money you get per instance and the amount of timeblocks needed to perform that job.
Active Displayed Job: This the job that is currently on display on the left column, and you can see its promotion details on the bottom. To check on the promotion status of a job, simply stop the job and restart it.
Inactive Job: This job is currently inactive as noted by the pause symbol. Some jobs may be inactive due to the lack of timeblocks available.
Locked Job: This job is currently locked, requiring certain hobby levels before you are able to unlock it. These unlock automatically when you have the hobby requirements and the Jobs tab will show a small exclamation mark denoting a new job available.
Max Level Job: Job status bar color changes from Orange to Green when at Max Level. 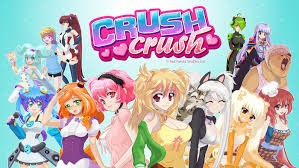 100 Play
All in all, the games concept is good for this game and the style. The game-play is very time consuming depending on which girl you are currently focusing on, but then again you can switch between girls with no cost of any currency and you can also speed things up with the gems you are given each time you are on a new level with a girl, for example: "Frenemy" "Acquaintance" "Friend-zoned" "Girlfriend" "Lover" "Awkward besties". You'll be able to rapidly click them in order to get to a higher level with them and you'll need to also do the other tasks that are listed below. Sorry/Chat/Flirt/Seduce, this allows you to talk with the girl, gaining at least 20 affection. There's a complex formula involving her "Liked Trait" and how many girls are at "Lover" status. Takes 10 seconds base to cool down. Stats allow you to view the unique stats of each girl, such as their age, birthday, and favorites (including their Liked Trait, which grants passive affection when you have at least one rank in it.) There is no cool down. Gifting allows you to spend money buying the girl gifts, increasing affection. Takes 20 seconds base to cool down.Dating allows you to spend money taking the girls on dates, increasing affection. Each date takes a different amount of time blocks and a set amount of time you must spend waiting to complete.
1159 0 Share
5.0 (1)