A Familiar Game of Thrones

Game of Thrones the game is a complex MMORTS that plays much like many other titles of that genre most closely resembling another game ive played called Lords. While having many if not all the same features Game of Thrones isn't just a re-skin of such game even though it could be argued it is, but however in my opinion improves upon those features by offering even more to do through events and quests (so many that I just kept stumbling upon more days later I didn't even know I had completed). In addition to that improvements are in the quality of the action with the willow tree hero challenges being more action packed and entertaining as well as the "cut" scenes of the battles feeling more alive. This isn't your typical log in set your buildings (even though everything scales in how long it takes to complete almost exponentially much like most games of this genre) and then logout and wait a day or two to play again but rather every log in has so much to do you spend quite a bit of time each iteration playing and if you prefer to micro manage with more tasks like hitting collection spots, aiding allies, helping out, and such you can nearly keep playing as long as you like with not a lot of wait (maybe not true in very high leveled players, but I see them doing a lot always so idk, im not there)

By playing this game you can get 1000 Play

Attached are images of the city, one mode of the game where you will manage most of your resources, city defenses, and heros. And the second image being of the over world where most alliance, resource collecting, battling, and raids will take place. I will leave you to discover the challenges, animations, "cut scenes", and further landscape to enjoy with. It's an addicting fun game with a slower start as the tutorial is simply a do as i say til you get the ropes and then it drops you off which the learning curve can hit hard as you are overwhelmed with all that is going on on screen. But once you get used to it and you start to crave advancements it becomes quite fun and only better if you get a good active alliance. I recommend the game to both casual and those looking for more guild social game play to check it out. A fresh take on a familiar game with great artwork, animations, and those fans of Game of Thrones will appreciate. All your favorite characters, quotes, and sound clips from the show can be heard. 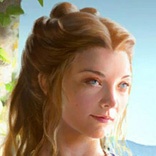 Overall I would rate this on the free to play scale a solid 8.5 out of 10. A bit above the others like it, and a solid game with no bugs encountered. I will leave with a few tips I have picked up so if you decide to play you can do so smartly. First, follow the quests and make sure to take advantage of all the free instant upgrades you can do early on. Make sure to ask allies for help on your buildings and be sure to plan to wait for as many of them to respond before using any speed ups as you get bigger aids the longer the build time is, then after use the speed ups. Try to save speed ups for when there are events for doing certain things like getting so many points by doing building upgrades or research so that way getting more done gets you rewards on top of completing whatever your other objective was. Dont be afraid to fight npc and the raid bosses early on as you dont lose troops from those battles like in pvp. Upgrade heros as far as you can before challenges to ensure you dont lose less than 3 stars so that way you can blitz for specific loot to level them up faster and upgrading there quality can often be more beneficial than leveling/ranking them up with gear. As for buildings food will seem pointless and overstocked early on but as you get to the point late game you have large armys lots of farms is needed so plan accordingly. Same with camps. You can collect gold on the map fast and often if you play that way for using on research and such so you don't need to go crazy on building mints to collect gold over army tents or hospitals. Have fun.