Grand Fantasia, an MMO for the little ones

The game is the classic free MMORPG dedicated to children (or beginners of the genre), with simplified mechanics, intuitive control systems and simple and colorful graphics.

We will start the game with the classic character editor, which, as a tradition trail, turns out to be rather thin and minimal, generating characters that are all similar to each other.
Peculiarities of Grand Fantasia is, however, the possibility / need to create, in addition to our alter ego, a secondary character (that will accompany us throughout the adventure) as "sprite".
Sprites, like the main character, will evolve and empower and have specific classes and abilities; it will be important, therefore, to carefully choose the type of sprite to take with us, since it will significantly change the outcome of the game. By playing this game you can get 100 Play
Once the aspects of character and sprite have been decided, we will be introduced on the island of Siwa, the first explorable site of the game, which will act as an "area-tutorial".
Here, we start with the degree of novice and we will tackle the rather simple and basic quests that will allow us to familiarize ourselves with the mechanics of the game (even if, to be honest, given their simplicity, there is no real need) .
Once you have reached level 5, between completed quests and mown enemies, we will finally have the opportunity to choose the class of our character between combatant, acolyte, hunter and caster; as we progress through the game (respectively at levels 15, 30 and 65), further specializations will be unlocked for each class that will allow us to direct our PG towards the style we prefer.

The gameplay of the game is elementary and follows the classic tradition of MMORPG: the myriad of quests resolve almost all in furious clashes against groups of more or less assorted enemies and the same fights are not biting (especially in the long run) given that limit a couple of clicks with the mouse on the enemy, leaving out any type of strategy or tactical element. 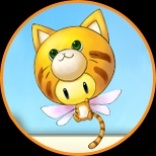 100 Play
Once ready, we will leave the island of Siwa to move to less secure places.
Despite the level (of course) more advanced than the enemies, the atmosphere is always very light-hearted and quiet, thanks to a "puffettoso" design that refers to Japanese manga, and you never feel, if not in rare cases, a real feeling of hostility or malice.
Part of the merit goes to the graphics that tends to tones very close to cartoons, with characters and environments deliberately not very serious in their realization.
It is a pity that, on a purely technical level, the game is on low levels, with textures that define undefined would be undeserved.
Grand Fantasia is exactly what it wants to be: a game with few pretensions, deliberately simple, mainly dedicated to smaller players or to all those convinced that MMORPG is the initials of some international association.
Simple, free and colorful. Nothing more, nothing less.
987 0 Share
5.0 (1)