Grand Fantasia is a free-to-play MMORPG game. Set in a fantasy world, this game offers character and sprite customization, competitive game-play through PvP combat and team-based matches, challenging dungeons and more! Travel through stunning lands, fighting bosses, and completing quests through a party, solo, or a guild. No matter your play style, this game has something for you!

While playing the game you also gain a Sprite, which is a magical being that will accompany you on your journey. They can help you with gathering materials and crafting skills. Make sure to pick the right sprite for your character! As stated earlier, the game also has guilds. The guilds feature customizable ranks, alteration of Guild powers, a chat, and message board. As the guild level up it will be able to hold more members!

Grand Fantasia has an extensive character creation system. When you start the game you have the option of creating a character. You can customize several aspects such as hair style, color, or eyes. The game also has an auto pathing system. You get to battle various monsters and explore a wide variety of areas. Some areas are off the ocean, in a forest, in desert like areas and more! The architecture in-game is influenced by western architecture. But you’ll also see various ships and other elements entwined in it as well.

When fighting monsters they drop random items that can assist you in your journey. Items are categorized by how they can assist you. Items can be for quests, upgrades, enchantments, special items and more. You also have your common items like potions. Depending on how much battling you do, items can pile up. You have the option of selling the items to NPCs or the auction house.

You can also go bounty hunting. Bounty hunting targets are given per the class that your in. Bounty hunting is great for gaining experience to help you level up faster. It’s also great for killing time and getting used to playing the game. When completing bounty hunting tasks you get a randomized loot reward. The reward can vary from minor items to bear mounts.
The game features a very saturated look with an anime art style. Once you hit level five you have the option of choosing your class. There are a few to choose from, there’s novice, fighter, hunter, acolyte, spellcaster, and mechanic. As you level up you can upgrade your classes.

What’s neat about this game is that the mouse icon changes per the object and task you are doing. For example, if you are clicking during attack and are battling an enemy your cursor will change to a sword. When you’re trying to use items or select elements in a shop your cursor changes to a white gloved, pointed finger.

As you progress you can have various mounts like buffalos, random bird monsters, dragons, horses, and more! You can also ride mecha machines. You are able to walk around in-game by pressing the WASD keys and using your mouse to click on objects of interest, such as people. Various NPCs will give you quests to complete. When completing quests you will unfold the story of Grand Fantasia. The game was published by Aeria games in 2009. 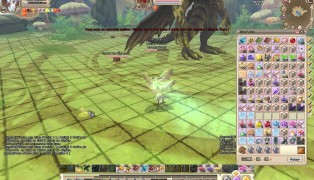 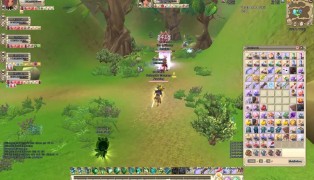