The good:
*Lots to do
*Nearly everything is customizable
*Can be whatever you want
*Good controls, music and sounds

The bad:
*Not a lot of in game info

Summary:
Minecraft, the block building game that is ever so popular. I'm here to tell you about this game, is it worth buying? Let's begin shall we?

What is Minecraft? It's basically an open world sandbox game where the only limit, is your imagination. You can play any way you want, be it in actual game modes or your own challenges.

Let's discuss game modes first. First, we have Creative mode, where you can fly, are completely invincible and have unlimited resources, perfect for anyone who wants to get their architectural side out. Next there's Survival mode, where you're thrown into a randomly generated world where you must gather food and materials, make a base and survive the night, a very fun and easily addicting game mode and possibly Mincrafts most famous game mode. It is usually annoying at the beginning, but after awhile it's fine. Next up is Adveture Mode, usually only for Adventure maps, to make sure that people can't ruin anything, which is what this does, prevents you from breaking or placing anything. More on the maps later, last is Hardcore mode. It's basically Survival mode locked at the hardest difficulty, but if you die even once, it's game over, no going back to that world. 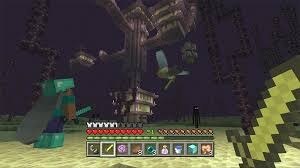 By playing this game you can get 100 Play
Let's go over worlds now, there are a few options. There's normal worlds, which generate a randomized world with unique places like Forests, Deserts, Snow Lands and more to name a few. There are also structures that can be found around the world, which are usually filled with loot. There's also Large Biomes, which increases the size of areas immensely. Then there's Amplified, which turns the world into a massive mountain range, which has quite nice views. There's also complete custom worlds to create with the customize option. Lastly, there's Superflat, which makes a bare flat world, usually just for building, but these can also be customized.

The game is massive, if you run out of things to do, it's easy to just create more things to do! There are many different types of monsters that will try to kill you, various dimensions to be explored, materials and ores to be collected, items to be crafted. Which brings me to my next point and the games only real bad thing, there's not a lot of in game info. Most of the time you will be looking stuff up on the Minecraft Wiki, although after a while you should have things mostly memorized. 100 Play
Of course you can play with your friends on custom servers and via LAN or the feature Mincraft Realms, allowing you to experience the block buster with friends.

Minecraft is very good with the atmosphere, it can be cheerful, running through a field of flowers or it can be scary, down a deep dark cave, fighting off monsters and looking for ores. It also has great sound effects and music to help this.

Minecraft is constantly getting updated, so there will always be more to do, but it's possible to download fan-made mods to add things to the game and make your play time even longer.

I've barely scratched the surface of this game, there's so much to do in the endless worlds or cubes. Is it worth the money? It sure is! This game has the potential to be almost anything you want. The fate of the blocky world is in your hands. Literally.
1394 0 Share
5.0 (1)