Why Paladins is my Favorite Game

Paladins is a hero based shooter that has been released around the same time as overwatch often being called a copy. I hope to teach you how the game is not a copy and is worth giving a try in this review. Paladins is a hero shooter that has diverse game play. The best way to explain it would to be to walk you through a match. First you queue for a game with 4 other teammates picking your best hero, depending on whether or not you buy the game you may have more or less heroes. You select your character and then select the customized deck you made to enhance an aspect of that character. Depending on what the enemy team chose you buy a buff that can somewhat counter the enemy team competition and then you battle it out with the enemy team. The store I mentioned isn't paid for with real money you buy the buffs with credits that you passively earn during the match. 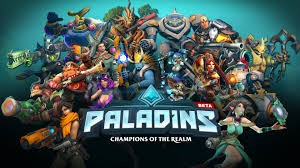 By playing this game you can get 100 Play
Paladins classes are all different and it's best to find one that best suits you're play style whether you like flaking the enemy, supporting your team, killing enemies, or protecting your teammates. Flanker, support, damage, and front line are those four class types and every hero in those types also play differently. When you can finally get into competitive your are ranked as a player and by the heroes you play so you can find out who you play the best as. It's great to find a main but you won't always be able to play as a hero and you should be able to play a diverse set of heroes from each of the types of heroes. Team composition really matters in paladins even the types of damage heroes. You need supports to at least 1 support to keep your team alive. You need at least one front line to be able to take and defend the objective. You need a flanker to disrupt the enemy team, and you need a damage hero to be able to kill. 1 wrong hero pick could cost you the match. 100 Play
There are a couple of problems with this game some of theme can be excused for it being in beta which are the bugs, bad teammates, and long queue times. The biggest problem would hands down be the bugs that occur in the game. These bugs can be exploited in a competitive match and make it a guaranteed win for a team taking the fun out of the game. Another problem is how some players don't understand how the game works. As someone who plays multiple times a day competitive and casual i'd like to think I understand the game, however you can always run into a teammate that can make a wrong hero pick costing you the match. For example you need a support and the final person picks another front line. This problem can't really be fixed by the developers but just be aware of bad teammates. One of the worst problems of this game is how long it can take for you to be queued into a game of competitive. I often just watch a video because it can take 12 minutes to find a competitive match. Just be ready to wait a while for your competitive match. other than those problems I can honestly say I love paladins as a game, and would definitely recommend playing it.
1531 0 Share
5.0 (1)