Rocket League is a game that anyone can look at for about 5 seconds and know immediately what it’s about. A bunch of cars are thrown into a huge field with one large soccer ball and two goals. Speaks for itself, right? As simple as it seems, it is one of the more fun games I have experienced and I have invested quite a few hours into it.

My personal experience with Rocket League has been one I’ve enjoyed. It is a very fun game to play with friends and can be quite exciting at times. I can remember many moments myself where the timer for the game has reached zero, with my opponent just a goal ahead of me about to win, until I am able to score it and clutch the game. It feels amazing, and I even made Rocket League montage which can be viewed here:

By playing this game you can get 100 Play
In Rocket League, the primary goal for anything is to just score goals and not let your enemies score goals. While the mission is simple, the journey is not. It requires a lot of time and practice to start feeling consistently good, but the game itself is incredibly good for an indie game. Rocket League offers many game modes. Some of which give you very unique powers! Everybody wants to make a goal, just use your spring loaded boxing glove and slam the ball into the goal!

There are three main skills that require training within Rocket League, which are Shooting, Goalie, and Aerials. Shooting the ball is taking an offensive strategy towards a goal. You work on angling your car correctly to strike the ball into the goal, as well as at what velocity and time to hit it. Playing as Goalie is the time to take a defensive approach, which is countering the shots your opponent will be making towards you and your team. This requires positioning yourself properly in the goal to prepare to block the shot, and timing as well. Aerials are another big part of the game, and also the most complicated to master, but will absolutely propel your success in the game. This skill group requires one to be able to propel themselves into the air to hit a ball just right in order to hit it before their opponents do. This skill also, once again, requires good timing. Timing is a big fundamental of being good at rocket league, knowing the moment to strike. It is a game of patience and dexterity. 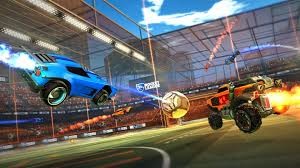 100 Play
This is a game that requires practice and lots of it. It has it’s own large competitive scene and many types of players who are working to improve their skill. It’s the type of game that you can just play without really getting too sick of it, like Wii Sports. It’s replayability is great, due to it’s active developers releasing frequent updates and the player base being active as well. It’s just an all around fun game, that you can really choose to take seriously or play for fun. Honestly, in my opinion, I like to think the game is at its peak when you strive for both. There is a great sense of pride that comes with knocking the ball into your opponent's goal.

Let’s talk strictly about Rocket Leagues competitive scene. There are many matchmaking options to choose from. One versus one duals, two versus two, and three versus three. Each of these games is five minutes. Every time you matchmake for a competitive game, always be ready to give it your all. Your team is always on their toes to make you seem a fool to yourself. Toxicity can be annoying but it's all apart of the game! Every player deals with it at some point. The best thing you can do about it is to ignore it and don’t be a part of it. If your looking to put all of your skills to the test, Rocket League’s competitive matchmaking is for you.
1929 0 Share
5.0 (1)