A tasteful review of Soul Calibur

Since it was my first time on Bananatic, Bananantic gave me a game to play, and get bananas. So, because it was the first browser game that I could find, I decided to play Soul Calibur.
When I got to the registration screen, I was greeted by 2 females that were probably there for fanservice. Still, kudos to the person who thought of putting that there while players register.
Next, I arrived at the character building part. I was a bit surprised to see that there only was a few characters that you could pick, and you can't customize your characters, unlike in Mount and Blade and ARK. Still, Soul Calibur is only just a browser game that runs on Flash, so I shouldn't compare it to actual games on Steam. Anyways, being the complete noob that I was, I did not know what character to pick, so I just picked the one that looked the most badass to me.

By playing this game you can get 100 Play
The game also wanted me to pick a name for my character. However, I wasn't allowed to make a name myself, I had to randomly select one. So soon, I had a semi-badass character named Joshua. Ok. When the game finally loaded for me, the first thing I noticed was the music. The music was very energetic, however, it was repetitive, and there was only one song that I could make out in the time I was playing. The next thing I noticed was that the UI seemed to combine many elements of MMORPG and other genres, and there were moves, gear, and other stuff that your character could have.
While I was still mulling over the UI, I leveled up. WTF?? It appeared that your character could basically go on autopilot, and just go straight to the quests. While I got my head around this concept, I leveled up 2 more times. 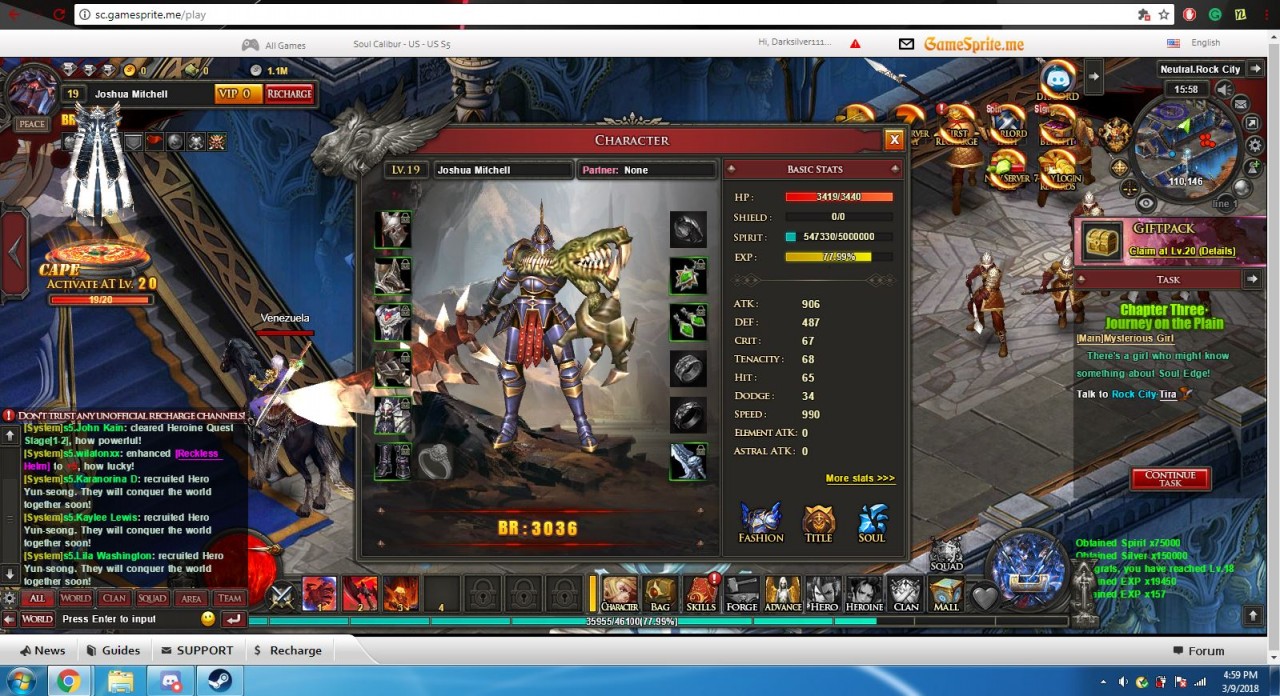 100 Play
I basically sat back and watched my character run around, getting exp, and leveling up. The only thing I needed to click was when my character received new gear, and the game was asking me whether or not to put it on, or when my character learned a new move.
Also, although I'm pretty sure that it's just that my computer is really crappy, but my frame rate for Soul Calibur was very low, and it kept freezing and lagging all over the place. However, it does not lag to the point of unplayable. It's basically a minor disturbance. That's all.
In conclusion, this game seemed like it was trying to copy many MMO and RPG games, but because it was on a browser, it just couldn't quite reach the level of those games. Still, I had a fun time playing it, and it was very calming to watch my guy run around killing monsters.
1184 0 Share
5.0 (2)