its a bit difficult for a children's game, the missions are not exact, you lose horse experience when you run into something but the moving of the horse is not exact or fluid. The map is off when it comes to the locations of missions. the fluidness of the game can use a lot of work though the graphics seem well placed the way the game plays could use some touch ups. even with the graphics all the way down still have a problem with the servers crashing and instead of needing to sign back in it shuts the whole game. you can not pick a name it has to be random or a weird name. being able to get into a clan that actually plays seems to be impossible. the fact that the horse starts at such a low level makes completely quests even more difficult and instead of leveling with you it has its own leveling system. By playing this game you can get 800 Play
its an okay game if you don't mind spending cash to level up quick. the movements are difficult to figure out at first and is even more difficult to get around if you are not on the horse. the missions are spread out and you have to watch the video after accepting a quest to know where you are going or you will be lost trying to find it. when you start the game the horse will stop suddenly or be unable to control quickly. as part of the game due to the horse having a leveling system that is slow and inconstant with the player. losing leveling when running into something with the weird controls that are not fluid makes it even more difficult to make the horse a better level so it doesn't make you run into stuff because of its low level. wish they spent more time on the movement of the horse and charter. 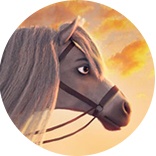 960 Play
make sure you have plenty of time on your hands or don't mind slow paced games. as said before i don't think this is a well made children's game if an adult is having problems with the controls then i'm sure a child around 5-10 trying to play will have issues as well. if i was to let one of my children attempt this game i am sure i would be just as confused as them onto how to play if just starting the game with them. the concept of the game is well done but the objectives and the missions points need a lot of work. it seems they put more time into the graphics of the game then they did the story line, fluidness of the game, or the ability to play. buying items for the game you need a lot of in game currency that is difficult to get without buying them. sorry if i repeated myself but you have to have a lot in this.
1207 0 Share
5.0 (1)