Have you ever wondered who would win a battle between magic and technology? If the steampunk and fantasy worlds are to your taste, we have the perfect game for you. A terrible war is raging ...

Black Gold Online is a new MMORPG set in a world where steampunk and fantasy mix,
and whose fate is uncertain. A new source of energy recently discovered, called black gold, is about to trigger a gigantic conflict between the two opposing factions. The Isenhorst faction wants to appropriate the black gold to improve its war technologies,
while the Erlandir faction would like to appropriate this resource in order to develop different types of magic. You will be involved at the heart of this conflict and will need to choose one of the two factions to determine their fate, and yours. 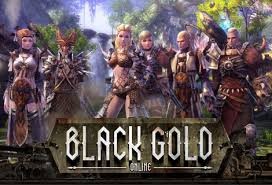 By playing this game you can get 100 Play
This downloadable game takes place on a huge continent called Montel, and both factions use weapons and fantasy powers inspired by different universes. This fantasy game includes innovative gameplay, 3D graphics, PvE and PvP content. Of course,
You will be able to face the opposing faction during massive battles, with your friends or solo.

To personalize your character on Black Gold Online, you can choose between one of six races available (three for each faction) and change its appearance as you wish. Three different classes per race are at your disposal,
and you will have to adapt to your enemies in order to gain ascendancy during each fight. Since the game is halfway between a futuristic universe and fantasy, you can choose from more than 100 vehicles powered by different energies, such as steam or mana. 100 Play
The game world is broken down into two large continents: one rather clear, populated by followers of magic and living in harmony with nature (they draw their power from nature and brings together Humans, Koshs and Brutes ) and the other where the darkness reigns, whose inhabitants (Humans,
Dwarves and Vampires) exploit technology and use mechanical armor in battle.
Both factions have flying fortresses, frames capable of carrying several characters and extensive customization options (the developer mentions including the manufacture of robots whose player selects the different components).

A few character classes were unveiled: the Mechwarrior (mechanical warrior), the Inquisitor (inquisitor), the Mystic (mystic), the Techno adept (the techie), the Werewolf (werewolf), the Alchemist (alchemist) , and the Witcher (witch).
983 0 Share
5.0 (1)