How To Prepare For The Legendary Armory

Getting legendary equipment in Guild Wars 2 is no small feat, but they're the strongest and most adaptable items in the game, and they're about to get even more convenient. On March 20, 2020, the developers of GW2, Arena Net, announced they would be adding The Legendary Armory to the game. The Legendary Armory is a feature that allows players to equip any legendary item - weapons, armor, rings, etc. - on any and all characters in their account *simultaneously* rather than having to pass them over to their other characters using bank slots or shared inventory spaces. We don't yet know when the Legendary Armory will come into the game as Arena Net has not announced a date for it. We know that it took them a long time to make build templates available, and the Legendary Armory is an extension of their build template system, so we might not see it in 2020. Even if this update is still a long way out, it should still encourage new players (or anyone without legendaries) to push for getting those top-tier items and thus play the game longer. 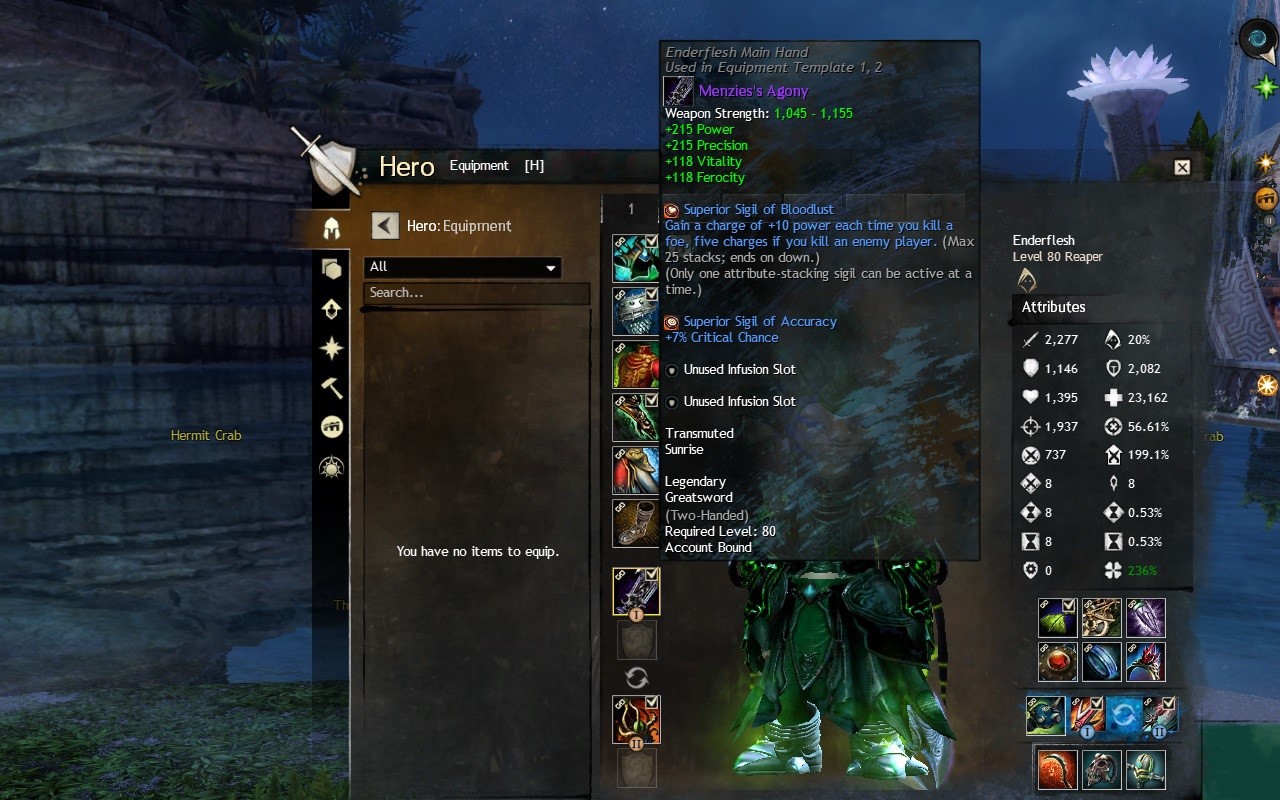 So what's the best thing to do in order to prepare for this inevitable buff to legendary items? Get a legendary, of course! Anything your character can equip can be legendary, with the exception of the aquabreather and gathering tools. Everything else in the hero panel can be a legendary item, which means once you have a legendary light helmet for example, all of your lightly armored character can use it as soon as they hit level 80. So with a potential 26 different slots for legendary items to go, which one should you prioritize for the Legendary Armory? I suggest a good weapon. Legendary armor is too demanding to be reasonable for anyone but the most hardcore raiders, and rings and accessories don't have as much impact on your stats as your weapons do. Picking a weapon should be about which kind of weapon sees the most use on all of your characters combined. For instance, if you like to play as a warrior and a mesmer a lot, you might find that you use the same kinds of weapons on both of them, like pistols, swords, and everybody's favorite: greatswords. Stocking the Legendary Armory with any legendary items would be a great boon, but weapons should be your priority. To that end, you should teach your characters to craft using high-end materials. If you don't want to suffer the grind of crafting your way up the ladder, you could just farm bosses for gold until you can buy a legendary item, but I'm not sure how the announcement or release of the Legendary Armory affects the market prices, if at all. Maybe you're looking for a compromise? You can buy the raw crafting materials needed for rare recipes if you have enough crafting experience to put them together yourself. You might even turn a profit if you sell back your legendary items! Just keep in mind that you'll still need to buy the recipe for the legendary chain, and some of the more arcane items on the trading post might not be available to you if you're free to play, or at all if they're exceptionally rare materials. Getting any legendary item in general is hard, and it typically hasn't been very rewarding for the amount of effort put into them, but when the Legendary Armory goes live, legendary items will become permanent progression towards a stronger and more capable you!