Everyone, even non-gamers have heard of the huge franchise that is League of Legends. People from all ages play it, for example, even my English teacher plays league. This may result from the fact that the way the game is systematized makes it appealing to all ages. It is also one of the biggest free to play, mass multiplayer games. I believe the reasons why League of Legends remains relevant today is because of its constant improvement, its appeal of strategic team play, and its addicting competitive community. This gaming community spans far and wide, connecting people from all parts of the world. However with this many people playing, this also means, it will be hard to get good at. Because of the millions of people playing, your chance of getting into Platinum are pretty minuscule, which might lead some to give up.

By playing this game you can get 100 Play
You play as a Champion, and you can unlock different characters. You might expect such a competitive game to have to pay in order to unlock all the characters, however that is not the case here. You can unlock all the characters for free, which also stimulates players to play more and more to try and get what they want. This factor also seperates them from other huge, mass multiplayer games. If you do want to buy something, there are skins that are very detailed, but as you may expect, pretty pricey. You can also buy characters instead of grinding for them. Each battle takes quite awhile, which is similar to Csgo where every match is 90 minutes. This may deem tiresome for some players who don't have such an attention span. Lol is also more fun with friends you know, but it's community also makes it fun to meet people online. 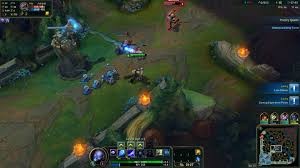 100 Play
The controls are a little different from other games as instead of using the arrow keys or wasd to move around, you have to right click with your mouse. This may be a harder adjustment at first, you probably will quickly accustom to it. You can also switch around your hotkeys to whatever you feel most comfortable with. As you level up, you receive skill points in which you can upgrade your powers with. League of Legends is very keen around strategy, because it is probably strategy over reflex skill in this game. It usually takes a couple years to reach the upper ranks, and some people just give up before that. A major aspect of this game is that you have backup who are minions. This is a major strategy point in when to attack and how. It is better to attack behind your minions and let them die first.
1108 0 Share
5.0 (1)