Super Mario odyssey is one of many in the Mario series of games. It is on the switch and switch lite exclusively. This game is unique in it's own right as there are islands to explore instead of set levels which was a new take on the normal play style of Mario. It also used the switches graphic capability and tried something new by making the graphics for the areas you explore in a realistic style making it almost a paradox for the Mario franchise. As all Mario games this game is suitable for all ages, however you can only have two players assuming you do not have more than 2 joy cons. The controls also differ when having more than one player which can make to hard to play at times. There are fourteen total worlds to explore along with two special worlds. In all of these you play as you would any Mario game by solving puzzles killing enemies and collecting the stars. Today I will be reviewing the new mechanics added to the game and my opinions on them as well as small details I found appealing or annoying throughout my playthrough of the game. There main new and advertised feature is cappy who accompanies you on your adventures. This allows you to take on the form on the enemy you throw cappy at and gain their powers. This is a whacky but wild take on many normal power ups and surprisingly works quite well. There is a large variety of enemies you can turn into from goombas to hammer bros. Each one of course doing something unique to aid the player to get the moons needed from that world. As for the worlds you travel to they are diverse and unique in their own right. While some work more than others they all are appealing in my opinion. I also have to give credit for the song one up girl as it is definitely unique and very catchy for all ages. This is clearly recognised by the Nintendo team because if you purchase the cartridge form the song lyrics are written on the cover art inside the case. There is also the mechanic of switching from the normal 3d graphics to the old style 2d temporarily to pass or reach certain areas. 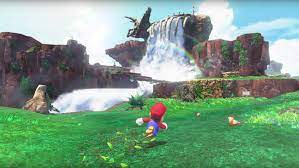 This I feel is a kind of ode not only to their old games but to the super Mario maker games as you can choose this style brining it back somewhat. They also brought the mechanic of being able to purchase clothes with in game money collected, which is always a fun add on and gives a reason to hit the shop on each world visited. One of my only complaints is that the designs for the bosses being the bunny gang for the majority of the game could of been thought out more. While some of them were fun to play and had a unique mechanic some felt more like cheap remakes of similar boss battles in past games made. To counter this however they have a dragon battle which I feel is so cool it overshadows the final boss of the game. Beside this however there is very little fault I can give the game. To conclude Super Mario Odyssey is a very special game in the franchise, where Nintendo decided to experiment with new mechanics and more realistic graphics and it payed off. I would certainly give my approval and recommend and platform lovers try this game out.