Armored Warfare: A Shame of a Game

Armored Warfare is a free, multiplayer, tank warfare game set around 2042. You can fight with all the modern tanks (like the M1A1 Abrams) unlike WarThunder and World of Tanks. You may be thinking that this is an alright game then. However, I'm gonna have to tell you it's not and it's not even the game's fault really.

Many new games always struggle with the accumulation of new players. Game's that are now all over the world obviously surpassed this hurdle, but I'm starting to think that this game will not. There is an empty lobby when trying to play 'Globals Ops' and 'PvP', so you're forced to play PvE where there are max. 30 players in the queue. It is a shame, as the game has a lot of potential and a lot of content (13GB for the basic game, more for HD versions (obviously) ). As this game was released in late 2015, I'm not sure if we will see it ever become widely popular as player's already have their own tank warfare games that they like. By playing this game you can get 100 Play
The picture above is the garage where you can see all of available tanks. Initially, I found it having a strong resemblance to World of Tanks, with all of the different attachments that you could add on. Everything was just eerily similar and it all just seemed like a World of Tanks DLC expansion.

Everything pretty much works the same in-game, so if you have found this game with previous knowledge of tank games then you will find this game rather easy to pick up. This is because it lacks originality.

I think players already have the tank game that they enjoy playing and because of this not many people are joining anymore. The developer may have realized this and tried to make the game more similar to those games, but people who were unsatisfied with the old games then wouldn't like this one either because it's almost an exact copy. 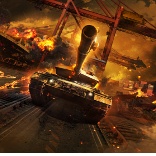 100 Play
The photo above was me in a PvE match, where I was supporting the two frontline tanks with another guy next to me. Now, if you take a quick google search of World of Tanks in-game then you will see what I'm talking about when I'm saying the game is all too similar. The bottom left interface is set out almost exactly the same, the minimap just seems like it's copy and pasted into the same position. the top left where they show each player, their tank and how many kills they have each, is the same. I think by this point you get what I'm talking about with originality.

There just seems to be a cycle around new games and accumulating players, and hear me out with this one. Originality will create more players, but if the game is not original then you have to have players which will create more players. Marketing obviously helps, but if the game is unoriginal and doesn't have lots of players enjoying the game then you have Armored Warfare.
865 0 Share
5.0 (1)