Hello! As written in the title, i'm a beta player; or more so I've been playing the game since then. To get a better perspective of how long I've been in the BDO community; my copy of this game was purchased on 12/13/15 15:44, this is the exact time and date as recorded by the official NA & EU Site. I had been playing overseas through ip's on the Korean version much before the NA release. My understanding for the game is great, my play time exceeds weeks, and my love for it is quite large. So with that said, this review may be biased; but will be as truthful as i can make it out to be. BDO has brought people together, created communities, and has done what every other mmo wishes to do; create a unique world in which feels like second nature to our true life. I hope this guide will help you choose to join this loving community or to at least try the game out for a try.

By playing this game you can get 100 Play
So BDO, what is it and how does it compare to other games within its genre? Black Desert Online (BDO) is an mmorpg "brawler", the game has the core elements of rpg and mmo games, character creation, progression, story, and individual skill sets and skill trees. The games story isn't where the developers focused, to be frank its quite lacklustre. The game truly shines with its skill sets, its world and never-ending expansion of players and individuality. The choices you make depending on what it is you are doing, can affect your player in game, lets say you decide to go around killing other players for fun, while it's allowed, it's not recommended. A karma system was put into place during the "closed beta 1" back in 2015, this put a punishment on those who punish others, for example, if your karma drops too low you may not be able to enter cities, towns etc. 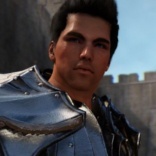 100 Play
Now as questioned before, this game has been dominating the market for the last two years, it's been a staple for mmo creators. Many people have recently turned from the larger marketed games such as Guild Wars 2, and even World of Warcraft after its recent downfall from the latest expansion. However, while this game is striving and taking players from other mmo's in the market, it has its downsides. The gameplay for example, fluent and honestly the best combat I've seen in any other game of its genre; BUT the game is a constant grind. Other builds for the characters pop up, and with those other characters pop up after. While the game keeps you coming back, if you are unable to share the gear from one character to the other a large amount of time will be extremely wasted.

As much as i love this game, i can only recommend it for ~80% of the people i talk to. Its not for everyone, but everyone should try it.
Other than the proof of purchase, all photos are directly from the site to help express my point, credit goes to the creators.
1722 0 Share
5.0 (1)