Best Tank Game Out There

There are many great tank or battle arena games out there or here on Bananatic Games Portal. Honourable mentions include War Thunder and Tanki Online, but World of Tanks must take the trophy for the best tank battle game available. Even better it's free, but that's not the point. I think for a truly great game like this I would pay any reasonable price, but since it's free I have money for other great titles on Steam.

Let's get one thing cleared up. I DO NOT think that this is either the most realistic tank battle game, that goes to WarThunder, but I do genuinely enjoy the system that World of Tanks (WoT) uses.

Basically for anyone who hasn't played either of these games yet:

WarThunder: no damage system, they use individual component and crew health instead which both impact performance but slowly kills you

World of Tanks: damage system (extremely difficult to one-shot), has individual/crew health but they (usually) don't kill you. They instead just impact performance.

By playing this game you can get 100 Play
Another thing I must mention is the graphics. I understand that some people don't care about graphics in a game, but for a game which has gone for the ultra-realistic style, it must be commended. The developers of the game must be thanked for making the game that it is today. It is in a believable terrain, clever maps have been designed optimised for gameplay and there seems to be an endless amount of tanks (which are extremely historically accurate) for which to play on. They seem to be updating the game without a break at the moment, so if you are looking for a game with all of these attributes you should give this one a good look!

Gameplay seems to be one thing the developers have focused on when making this game. The physics are all right, everything just seems to be going for it and to date I still haven't found any bugs. 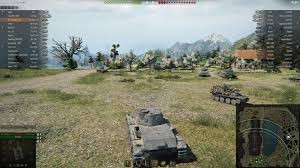 100 Play
So yeah, if I was to summarise this game I would have to say that this is probably THE best tank battle arena games out there. It is most certainly worth a check seeing as it has come from Wargaming.net, one of the leading title developers in this genre. WarThunder (made by Gaijin) is also commendable, if you are looking to play with planes in the same battlefield, but if you are looking for the raw experience of a bit of slower paced combat then this is the game for you.

I think I would have to recommend this to anyone who is currently or has been into first-person shooters, strategy games or games from other titles from these companies. Seriously, I cannot recommend this game enough and even though the download is a bit more than your average size, it is worth definitely worth checking out!
1315 0 Share
5.0 (1)