War2 Glory is a free to play real-time strategy game that’s browser-based. Players assume the role of an emperor in charge of a kingdom ravaged by war. You must build an army, rise through the ranks, and participate in large-scale battles taken straight from the history books. Can you salvage your warn-torn nation and bring it back to a military might? Sign up for a free account today and find out.

The game feature both single-player and multiplayer elements, meaning you can either strike out on your own to conquer the world or form tactical allegiances with others to vanquish your enemies. Either way, you’ll have to assemble an army capable of defending your territory, as well as expanding your borders.

War2 Glory features over 40 different units that you can build. These are all taken directly from World War 2, meaning you’ll be able to conquer the air, seas, and land around you. But to do so, you must balance the building of your base and collection of resources. To successfully compete, you’ll need to keep the food, steel, and soldiers flowing through the production line. Don’t over-stretch your resources, or you’ll find that your empire is vulnerable to attack.

Developers Gamigo have included many of the classic elements of RTS games, as well as multiplayer functionality. You’ll need to be at your strategic best to conquer your foes, using the right tactics to outmaneuver them. If you’re playing with friends, you can team up to have greater access to land and resources. But be warned, alliances can be fragile.
War2 Glory is inspired by World War II, and the graphics reflect this. As you choose a Commander-In-Chief to play as, you’ll see different animations and cutscenes. The models are also richly detailed, impressively so for a browser-based game.
If you’re a fan of military RTS games, War2 Glory could be the right choice for you. It has an expansive range of units and locations to explore, and will test your tactical knowledge to the max. Sign up and start playing today for free. 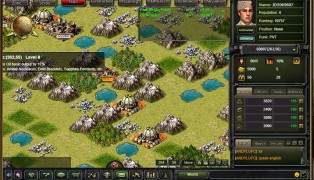