Dragon Awaken is a browser MMORPG where players take on the role of a destined hero who must form a trusty party to save the world. Recruit a group of heroes, from valiant knights riding horse companions to wobbly Pandas, to help you on your adventure. Engage battles via turn-based combat, unleashing ultimate abilities to annihilate enemies. Fight manually or switch on automated combat and witness your warriors optimally win through in battles. There are no fixed classes in Dragon Awaken. Level up, unlocking new talents, and decide your own path and fate. Earn new mounts to aid you on your journey as you travel from quest to quest. Challenge other players in PvP and flaunt your strength to other warriors.

Dragon Awaken Key Features:
No Fixed Classes - select any talents you like for your characters and forge the builds you want to play.
Multiple Heroes - grow your team from a wide variety of powerful heroes to save the world.
Mount Collection - collect multiple mounts, from Lava Dragons to glorious Griffins.
Mini-Games - take a break from adventuring and play multiple mini-games to earn unique rewards.
PvP - test your team's prowess by challenging other players.

This strategic browser-based MMORPG gives lovers of semi-turn-based combat the opportunity to pit their wits against other players. Since its launch in 2017, the dev team have continued to support, update and release content, meaning there is always a fresh challenge waiting for you. Newcomers to the game don’t have to fear established players, with new servers coming with regularity. The addition of micro transactions also makes it possible to rise up the ranks by spending money.

Once you’re levelled up high enough or have gear that’s capable, you can start taking on the game’s fiercest dragons, testing your mettle to gain the biggest rewards. Fans of the game praise its strategic elements, flashy and colourful graphics, and the fact that it runs on even the most basic PCs. No download is required, meaning you can get started straight away.

Overall, Dragon Awaken blends elements of traditional MMORPGs and strategy games with some unique mechanics and colourful artwork. Players can choose their class and heroes, take on their fellow players, and challenge the might of dragons. 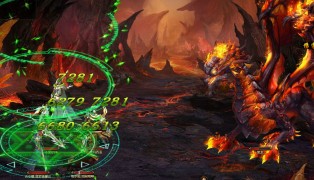