RoboManiac is a free-to-play browser-based game of the future that offers an original and thrilling blend of RPG and Sports Manager titles. You create a robot, gear it out it in your own Workshop with superb weapons and assorted items, and pitch them into the fight!
On an isolated planet in the distant future, humans have left to escape an impending disaster. 30 years later, the robots they left behind are awake, and taking the planet's future into their own robotic hands.

Fight with your bot in the Metal Kings League for glory and cold, hard Credits. Moreover, there are adventurous missions and quests to fulfill, in order to defend the Habitat against other bots and nasty creatures. The future of RoboManiac is up to the bots to decide! "Challenge your competitors and show that you belong to those fighting in the first division, and can protect the world from attack. Develop your robot character, compete against other robots and creatures, and tackle challenging tasks and quests!"

Build Your Bots – Level your bot up and upgrade them with weapons and parts. Research new technologies in your very own research facility!

Get Into The Action – Fight your bot in the Metal Kings League and earn rankings and rewards. Daily league battles and missions offer further rewards and options.

Learn The Tale – Learn about the planet Centerra and its people – and robots – as you play through the game. Quests and other PvE content offer storyline and rewards.

Fair To Play – Even with premium account status, RoboManiac prides itself on being fair to play. There are no pay to win mechanics or golden bullets to be found. Join the friendly community.

Why not start up this electric game today here on Bananatic and begin building? You'll be showing off your creations and progress across social media for ages. 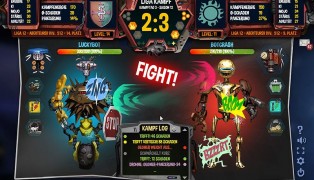